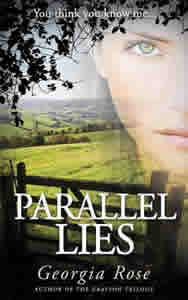 Parallel Lies is the first book in The Ross Duology, a series of romantic, crime and suspense stories.

A woman with a hidden past. A new love on the horizon. Will the truth set her free or cost her everything?

Madeleine Ross has meticulously organized her world to leave no trace of her criminal past. After creating a new identity for herself, her only remaining connection to her previous life is the security work she does for a small-town insurance company. But when she starts falling for her handsome boss, Dan, she’s worried letting him in will expose secrets best kept locked away…

As their attraction grows stronger, Madeline’s attempts to keep Dan in the dark go horribly wrong when a dangerous ex emerges from her unsavoury past. After her former flame gives her an offer she can’t refuse, she has one choice left: ditch her life as a thief to let Dan in or embrace her shady dealings to destroy her only shot at a happy future…

Parallel Lies is the first book in a fast-paced romantic suspense series. If you like troubled heroines, character-driven action, and powerful emotions, then you’ll love Georgia Rose’s thrilling novel.

Parallel Lies is available as an audio book, paperback or ebook.

Get Parallel Lies from your favourite retailer here.

Or buy the ebook directly from the author here

‘For those who admire character-driven thrillers, who can handle brief but shocking violence, and who enjoy beautiful writing’ Barb Taub Blog

‘Mystery and romance peppered with a lot of attitude, this is a thrill of a read.’ Christina Philippou Blog

‘it’s a cracking good read, a mixture of mystery and crime with an overlay of romance.’ Judith Barrow Blog

‘Once you start reading Maddy’s story, the narrative grabs you and hooks you to the end! Loving Vengeance is a page-turning novel, especially for anyone who enjoys reading well-written crime novels including romantic suspense and set in the UK.’

‘This nicely written book has some nice twists as the author brings the story to a satisfying conclusion. As usual with a Georgia Rose book, the characters are well-defined and there are some humorous touches along the way. I’m not a huge fan of romance but am happy if its place in a plot is secondary to a good story, so Georgia Rose gets an extra half star from me for satisfying this criteria. There is a comforting cosy feel about the author’s style which will, without doubt, satisfy her fans.’

‘Loving Vengeance is quite a fast paced, character driven story, with the odd chapter coming from Dan’s point of view as he does his best to be there for Maddy and keep her safe. A fitting and very enjoyable conclusion to Maddy’s exploits.’

Between the Lines Blog

‘This time, I’m more than satisfied with the ending, especially with Maddy’s final twist. As I said about the last book, for those who admire character-driven thrillers, who can handle brief but shocking violence, and who enjoy beautiful writing, I can’t recommend both books in this series enough.’

‘What makes the books of Georgia Rose so different is the way she takes us into the mind of her heroines. Speaking in the first person, Maddy tells us all her feelings, her strengths and her weaknesses. Few of us would walk into such dangerous situations of be so pro-active in helping others but this makes for a thrilling, eventful story.’

Lost in a Good Book Blog.

‘it’s a cracking good read, a mixture of mystery and crime with an overlay of romance.’

‘Mystery and romance peppered with a lot of attitude, this is a thrill of a read.’

‘For those who admire character-driven thrillers, who can handle brief but shocking violence, and who enjoy beautiful writing’

‘Georgia Rose has again pulled out all the stops to give her fans an escapist adventure novel of high quality.’

‘The story is very well written, develops smoothly, and fans of romantic adventure will love this book.’

‘A truly majestic end to a gripping trilogy.’

‘THICKER THAN WATER delivers the romance, suspense and, especially, the final satisfaction readers of this series pine for.’

‘It’s extremely well written and crafted, with surprises and suspense, and completely held my attention from the beginning.’

Between the Lines Book Blog

‘This is such a satisfying conclusion to a terrific series.’

‘This is one of my all-time favorite trilogies and I highly recommend it.’

‘You will not be disappointed with the ending to this entertaining trilogy, on the contrary, the ending makes having read the series worthwhile. Lucky those of you who have not read it yet!’

‘This was a fulfilling read that was both entertaining and satisfying. A perfect escape from my everyday life.’

‘Georgia’s writing is a breath of fresh air.’

Lost in a Good Book Blog

‘The Grayson series is all about the characters. The plot is incidental to the relationships Emma develops, which come to the boil in this third segment, so if you are a reader who enjoys a bit of psychology with their romance – and Thicker than Water is the most realistically romantic of all the sections - you will enjoy this.’

‘I believe this book will appeal to those who enjoy straightforward fast-moving action thrillers. Sometimes a sequel can promise much, only to disappoint on delivery but not in this case.’

‘I’d call this trilogy a tear soaked, romantic adventure. If that kind of thing is your style go pick them up – all of them. They only get better as they go!’

‘I was holding my breath through the action part of the book, feeling fear and foreboding for all the characters I’d come to know from the first book. Again the horses had important roles of their own in the excitement, which added to the action.’

‘Georgia as with the first book has a really wonderful way with words and the way that she describes the characters, the landscapes and the action is beautiful.’

‘This book was an excellent follow-up to the first book and a very suspenseful read!!’

‘I loved the jump straight into the action from the start of the book, it kept me reading and eager for the story.’

‘The descriptions are wonderful, full of energy, and crisp.’

‘Georgia Rose’s real skill as a writer is most evident in the way she gets her readers to actually feel the emotions of her characters.’

‘There’s a marked increase in the action and pacing in the second of The Grayson Trilogy and I was hooked into the story from the beginning.’

Between the Lines Book Blog

‘Here we have contemporary relationship problems, drama, intrigue and mystery and superb characterisation. What more could you want?’

Lost in a Good Book Blog

‘Before the Dawn is a roller-coaster, a not-to-be-put-down adrenaline junkie’s dream of a thriller.’

‘There's no cliff hanger so I don't know what to expect in the next book in the series, but I'm intrigued enough to add it to my TBR list.’

‘Well written and entertaining, I enjoyed the storyline and look forward to following on with the series.’

‘The story is filled with detail, especially about how to look after horses which for me was not especially interesting but the well-crafted plot, strong characterisation and thrilling denouement made this book an excellent read.’

‘I think Georgia Rose’s real skill as a writer lies in her painstaking attention to detail. She creates in Melton Estate a world that is totally believable.’

‘Georgia Rose has a free-flowing writing style and I particularly liked the alliterative phrase: ‘men chase and women choose’. The descriptive passages were well-constructed, building a believable backdrop. Rose demonstrates an admirable understanding of equine husbandry and has clearly carried out a significant amount of background research to anchor her tale in factual accuracy in other areas.'

‘Emma Grayson has suffered far more than any woman should have to and I immediately liked and sympathized with the character. In actual fact, the author does such a good job of forging a connection with the character and the reader that I found myself in emotional turmoil at times.’

‘I loved the themes of lost faith, confidence, trust and redemption in this book as well as the lovely setting in which the story takes place. There are quite a few moments of suspense and excitement as well as heart-warming feel good parts that made this a lovely read for me.’

‘The main character, Emma, has suffered a great tragedy, and I thought this was extremely well illustrated, quite heart-rending and very real. Quite outstanding, actually - shows real talent. You'll have to read it!’