Review for Business As Usual by E.L.Lindley 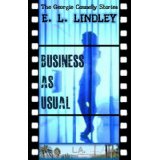 I would like to thank E.L.Lindley for gifting me a copy of Business As Usual which I have greatly enjoyed reading. Very well written and fast paced we meet Georgie Connelly who is rather embarrassingly, and reluctantly, undertaking community service after a misunderstanding.

She is a documentary film maker which I thought was an original and interesting angle lending itself easily to the possibility of further stories. Georgie is short tempered and difficult but I immediately liked her. Beneath the prickly exterior is a warm hearted soul willing to go the extra mile to help the people she meets. She finds many, particularly social, situations awkward which made me feel empathy for her and Lindley portrays this rather flawed character, as well as all the others, skilfully and consistently throughout the book.

Georgie is already in trouble due to a previous documentary she has made about a white supremacist and despite her friends, Eric and Callie, arranging for an old friend, James Finn, to help protect her, this threat comes swiftly to a violent conclusion.

Georgie is meanwhile setting up her next project with a Russian gangster who is the head of a seedy underworld of drugs, prostitution and people trafficking, Maxim Petrov. Wanting to be portrayed as a successful and legitimate businessman Petrov is charming and personable but as Georgie works to expose him she realises too late the dangerous position she has put herself and those around her in.

Throughout the story James Finn struggles to look after Georgie and she gives him a hard time but there is an attraction growing between them which I couldn’t help hoping would develop but I’ll stop there not wanting to give anything away. The ending was perfect. This story was satisfactorily concluded, but plenty of scope was left for further stories to follow.

I will definitely be reading more by this talented and entertaining author and I highly recommend Business As Usual to all readers who like strong characters and fast paced action thrillers.

Business As Usual is available here:

You can see my reviews for The Ties That Bind, the second book in the series and The Righteous Path, the third, by clicking on the titles.

5 Responses to Review for Business As Usual by E.L.Lindley