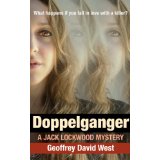 Having read West’s previous book, Rock’n’Roll Suicide (reviewed here), I’d been looking forward to reading Doppelganger and whilst you can sometimes be left feeling disappointed by a sequel I certainly wasn’t with this one. A strapline on the front cover intriguingly reads, ‘What happens if you fall in love with a killer?’ and this hints at the troubles that are chasing Jack Lockwood through this action packed story though it is never as simple as him just having one issue to deal with.

Lockwood is a very likeable, attractive though modest character who writes books on themes disliked by police and criminals alike as well as also being a criminal profiler and therefore finding himself working alongside and against the same. This well written story starts with Lockwood being threatened about a book he’s writing then he’s involved in an accident in his home city of Canterbury bringing him to the attention of the police who already have their hands full dealing with a serial killer. Lockwood goes to the hospital to visit the woman he hits and its there that he fatefully meets Lucy Green. There’s plenty of thrilling action for Lockwood, who proves himself more than capable of looking after himself as well as others, when a contract is taken out on him.

Despite having a tough exterior Lockwood is a sensitive guy and having fallen in love has many emotional issues to deal with when his suspicions are raised about Lucy’s background and he seems naively indecisive about his choices in women generally while I really didn’t like my flawed hero, who just sees the good in everyone, being messed about. I won’t give anything away but we meet many characters in different settings throughout this story and each is beautifully described as West’s words bring the scenes and settings vividly alive. I didn’t want it to end, always a good sign, and I hope there are to be more Jack Lockwood stories to follow from this entertaining and skilful author.

This review was originally posted on the 2 April 2014.

So you can go have a look at other reviews before popping this into your shopping basket here are the links:-

My review for The Jack Lockwood Diaries (a short story collection) can be read here.

One Response to Review for Doppelganger by Geoffrey David West