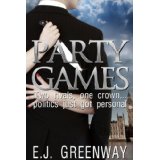 I do not particularly follow politics or have any interest in politicians themselves but however much we may try and steer clear of politics they are threaded through all of our lives however we choose to live them. Throughout our family, working or social lives politics reign so I don’t believe you have to have an interest in Westminister to enjoy this Party Games. That said I did find the story a bit sticky to get into, nothing to do with the writing which was excellent throughout but purely with the who’s who of the cast, their titles, their positions and their allegiances. However once I’d settled in I was soon immersed in a story that I imagine is probably startlingly close to reality.

My favourite character was Anthea who was gorgeous, smart and driven though I wasn’t sure about her decision making when it came to romance. She was also loyal and it seemed was one of the few who were. There was an awful lot of plotting going on behind the backs of others with a fair amount of arm twisting, blackmail and the continual game playing with the press as a stream of stories kept coming out threatening the party leadership by Rodney who was having a particularly trying time. It does make you wonder why anyone would want to be in that sort of job. I detested Colin, that whole loyalty thing again and that’s all I’m going to say about him. And then there were the affairs and as in real life some of these politicians seemed drawn to inappropriate relationships though perhaps I’m tarring all with the same brush!

This is the first book in a series and is very well completed by Greenaway and as I romped towards the ending, by this time unable to put it down, I was left feeling satisfied with a well rounded story but aware of plenty of threads left to be continued in the next in the series, Power Play. Greenaway clearly knows what she is talking about with the workings of the political scene and is skilled in creating a great cast letting us see their innermost thoughts and feelings, warts and all. I’d recommend this to anyone who likes strong though realistically flawed characters in an original and interesting setting.

This review was originally posted 8 October 2014

Those all important purchase links – or if you just want to investigate further:-

E J Greenway can be found on Twitter @emsie1979

One Response to Review for Party Games by E J Greenway