Review for The Righteous Path by E.L. Lindley 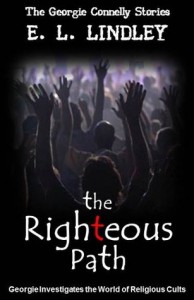 It’s a truly wonderful thing to open a new book you’ve been really looking forward to from an author whose work you’ve enjoyed in the past. Of course there’s always the chance the book might not live up to your love of what you’ve read before so it’s a relief when you dive in and then get to relax, knowing all is well. The Righteous Path, the third in the Georgie Connolly Stories and a series I’m really enjoying is just such a read and I knew I was in safe hands as soon as I started it. There I was back with the familiar characters again, solid and reliable, though of course their relationships are evolving through the books just as they should.

Georgie Connolly is as high maintenance as ever and with her fiery temper and her ability to take every slight to heart she continues to give everyone around her a really hard time. Georgie’s incredibly patient boyfriend James takes the brunt of her moods and often irrational decision making but even he gets pushed too far in this story. As has happened before when Georgie has a new project, nothing gets in her way and this time her zealous focus is on a religious cult which she starts investigating for a new documentary.

Georgie, somewhat surprisingly as she is no one’s fool, is increasingly drawn in by the charismatic Jed Munroe who appears to lead the cult and like all those who follow him she starts to believe he is the real thing and not some fake psychic. Despite warnings from her friends about him she puts herself in danger by moving onto the ranch where the cult is based. Her investigations lead her to find out about the true nature of what’s going on within the cult when she discovers there’s a second ranch but resentful of the fact that those around her keep wanting to take over she takes matters in to her own hands putting herself and all those around her in danger.

Lindley’s writing is consistently strong, the storylines are original and the characterisations realistic. This is a really super series of stories that I’d highly recommend to anyone who enjoys good no nonsense storytelling with plenty of action and thrills along the way and I shall definitely be getting the next one.

If you fancy a copy or want to check out other reviews here you go:-

You can see my review for Business As Usual , which is the first book in the series and  The Ties that Bind, which is the second, by clicking on the titles.

7 Responses to Review for The Righteous Path by E.L. Lindley