Review for Who Else Is There? by Philip Catshill 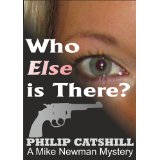 Who Else Is There? continues the story of policeman Mike Newman from For All Eternity but is not in the same short story format. There were many things I liked about this book but a few things I wasn’t quite so keen on. Mr Catshill is accomplished at producing strong, consistent writing and considering he puts this on his book description ‘Ever since my third stroke, I have been driven by the need to demonstrate just what I can produce from my severely damaged brain. Therefore, I make this contract with you, my potential reader, in that every word you see in my books has been written by me, edited and proofread by me and honed by me to produce my best, and not my best as ‘improved’, ‘altered’, or ‘polished’ by anyone else’ he has done an impressive job of putting out a very tidy, well formatted book. I can’t remember spotting one error in it.

Mike Newman is the same steady, likeable character from the first book but his wife is possibly the coldest hearted, cruelly unpleasant woman ever.  Mike is brutally attacked early on in this story although it is not clear exactly by whom and his injuries are so severe they are life changing.

The identity of the person who attacks Mike is kept from us though at various points we are led to believe it is one person, then another, just as in the actual investigation in the story, which leads to the wrong man being accused with tragic consequences. Of course in the end we do find out like in all good mysteries but not without a fair amount of violence and bloodshed along the way.

I felt there were a few unlikely things that happened in this book and I particularly would have liked there to have been a bit more background into the thought processes of some of the characters. This would have made it more convincing as to why certain events happened as some reactions, such as the initial attack on Mike was extreme and came a little out of the blue but it wasn’t made that clear why.

I am guessing that Catshill’s background is in the police such is his knowledge of the goings on and I imagine the types of office politics you get within the force. At the time this is set, around the 1980’s there seems to be a certain amount of corruption and covering up of shady behaviour by officers which is a little unsettling. But if you like police crime mysteries where you have no more idea who the killer is than the police themselves then this is one for you.

2 Responses to Review for Who Else Is There? by Philip Catshill