The writing has slowed a little this week, mainly because I’ve pretty much got the story down and this week has been more about filling in little scenes and bits of conversation. I started off sticking to my 2000 words a day target but decided I was writing stuff purely for the sake of getting to the daily total rather than it being anything meaningful. This is a waste of time, in my opinion.

I therefore refocused and simply worked on what actually needed to be added. I anticipate I will be over the 70K mark by the 22nd and that will be the first draft complete. It will be a little lighter on words than I was anticipating. I was originally aiming for 80K but I know that there are some bits that need adding earlier in the story, now that I have got to the end. In the editing process I usually cut about 10% and I think here I will be adding 20%, possibly even 25% – there are some serious rewrites… boo hiss (and that’s before it’s even gone to my editor!) – so I think I shall end up nearer to the 80K. 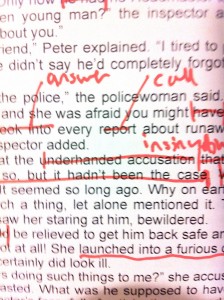 I’m looking forward to the editing phase, or enrichment, as I like to call it. It’s my favourite part of writing. 😀 I’ve decided I don’t like first drafts, not at all, but I love having something to craft into shape. I’ve had to be very strict with myself not to start the edits already actually.

In other news, I watched an excellent webinar from Joanna Penn and Mark Dawson this week on Amazon Advertising and got into a right pickle when trying to open up an Amazon Advertising account. And I’ve started doing some Facebook Ads, which I’m incredibly nervous about.

Also, and the biggest news of all, my narrator is recording the audio version of Parallel Lies right now! Again, cue anxiety, and another huge learning curve ahead with trying to launch that, but it should be fun 😀 I’ll let you know when it’s available!

I haven’t managed to fit anything else into the week, that’s the thing with writing, but I shall be in touch next weekend for the last in this series of accountability posts as my first draft will be done… and I’ll give you all a break.