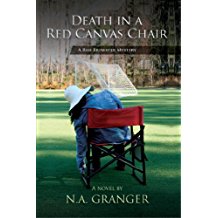 Death in a Red Canvas Chair is a murder mystery with an amateur sleuth, a format I’m keen on. I do like small town settings, and Pequod in Maine is just such a place. The protagonist, Rhe Brewster, is on first name terms with the receptionist at the police station and the police chief, Sam, is her brother in law. There is history with other characters because of school and of course everyone knows everyone else’s business, or at least they would like to.

I did not take to Will, Rhe’s husband, at all. A little controlling and grumpy I felt Rhe dreaded him finding out what she was getting involved in, which is never healthy, but I was pleased that Rhe carried on regardless.

Rhe seems to have had a past with investigation but on a purely amateur basis. This time she is appointed as a consultant to the police, which gives her more investigative powers, and credibility.

There is, of course, a murder and Rhe is kept busy trying to piece together what happened by chatting to students, other parents and faculty members.

Without giving anything away I found the opening, the actual placing of the body bit, to this a little unbelievable (although this was eventually explained). But after this the author gets into her stride and takes on the investigation with huge conviction.

This story turns out to be much more than just a murder mystery though as the murder almost gets lost in the background because of the other bad things going on, which for fear of spoilers I won’t expand further on.

There are plenty of people who could be up to no good and this author is terrific at raising our suspicions over who could be involved among the wide ranging cast.

I liked Rhe’s relationship with Sam and Paulette particularly and was positively salivating at the baked goods produced by Paulette. This book reminded me of the Alphabet Series by Sue Grafton and I have a desire to try the cinnamon rolls mentioned in both.

This was a thoroughly enjoyable read. The medical and sailing knowledge was detailed and you could tell the author knows what she is talking about. It was well paced throughout and with plenty of action. I highly recommend to all readers who like well written murder mysteries.