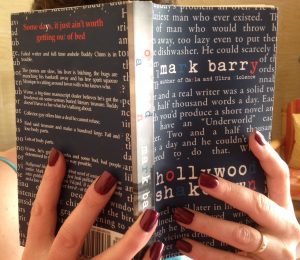 I have read all of Mark Barry’s books now and for some reason his first as been left until my last. He is the most under-rated writer I know and I would encourage…no, urge you to read any of his books, there is something for everyone as he is a multi-genre writer and novelist. Hollywood Shakedown is his debut novel and it is astonishingly good.

It follows the misfortunes of barfly and loser Buddy Chinn. Buddy lacks enthusiasm for almost everything apart from drinking, betting on the ponies and Monique, his somewhat errant girlfriend. As with anything Barry writes I could take a quote from pretty much any page but this one gives you a flavour of all you need to know about Chinn.

‘He was no hunter, and he was possibly the laziest man alive. It was all he could do to track down his socks from under his bed in the morning. Testament to this was Buddy’s status. Thirty eight years old and only two books and five short stories – all the Berkeley promise laid bare. A rented apartment in Glendale. A personal hygiene problem and a feckless girlfriend who, like a tabby cat, came home when she needed feeding.’

Chinn is given a challenge to find a missing manuscript, a task he is inherently incapable of achieving alone which leads him to enlist the help of another. They set off on the quest for something Chinn doesn’t even believe exists. This story has many elements; it definitely has comedic lines, witty one liners throughout and delicious moments like Buddy’s encounter with a particularly British drink at a football match. And it has that thriller edge running through it courtesy of Bishop, Ramirez and The Nebraskan who does unspeakable things to Monique but all under the orders of someone for whom the word ‘No’ is not an option.

However I found that at its heart it is a love story and as with all love stories it peaks and troughs as it deals with the full range of human emotions and insecurities. What is particularly wonderfully done here is when we get to see what happens to Monique as we get to share in her side of one part of the story. There is more to it than just the love story between Buddy and Monique though as long hidden feelings are stirred up in Buddy because of what they are hunting. Memories of long forgotten moments are relived at a crucial time when Buddy is having a panic attack but with them comes some sort of closure and a strength that Buddy didn’t know he had.

This is an exceptional well written novel, just writing this review and re-living my thoughts about it makes me want to go and read it again. It’s fast paced, engaging and filled with vividly portrayed characters and as you fly towards the end you hope against hope that it’s going to be a happy one. If you have read any of Barry’s other works you will know just how good, and surprising, the endings can be. So I was delighted to find I was coming in to land smoothly to an unexpected but oh so welcome one which had me cheering the characters on. Everything was going brilliantly, the landing gear down, the anticipation of touch down and then right at the point when my wheels were about to hit the runway and I was feeling all warm and fuzzy, right in the awww moment I…

…and there I have to leave it because any more would be a huge spoiler for what happens next and whilst I desperately want to tell you more and would relish giving you every detail I can’t… it would be so very, very wrong… especially when it is so easy for you to go right now and get your own copy to enjoy.

It is only 99p/$1.56 to buy this book – I have no idea where else you would get so much entertainment for so very little…

11 Responses to #Bookreview for Hollywood Shakedown by Mark Barry @GreenWizard62