#Bookreview for The Devil You Know by @TerryTyler4 #psychological #mystery 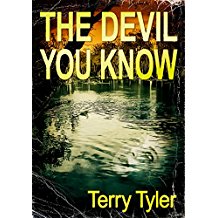 When I used to babysit as a teenager I’d scare myself watching Crimewatch by imagining how terrifying it would be to find the doppelganger for one of the photo-fits to be the very person sat on the other end of the sofa to you. The Devil You Know reminded me of those times and it shows the various ways suspicions can evolve.

Young women are being murdered and this story follows different characters as they come to suspect that their nearest and dearest could be the culprit.

I have read several books by this author and this one is full of what she does best. The characterisations are terrific and I thoroughly enjoyed the different relationships. I felt sorry for Juliet but I think my favourites were Steve and Dorothy. I could completely relate to the way he felt about the life he was leading and her thoughts on the life and relationship she had with her son were spot on and her anxiety about what her son might be up to very real. Tamsin was also brilliantly done as the over-invested colleague.

I liked the format of the book as well. It opened with the introductions and laying out of the evidence for the possible guilt of each of the suspects. The back and forth as suspicions grew or were potentially resolved only to rear their heads again at a later date was terrific.

Then there was the resolution on the hunt for the killer followed by the aftermath where all answers were given to the reasons why suspicions were raised in the first place. Finally, there was a delightful twist that in a way you knew was coming if you hadn’t forgotten some of the loose ends that had been left hanging along the way.

Thoroughly enjoyable, I’d recommend this to all who like character driven, well-written and excellently observed relationship storylines with a gritty, and often harsh, but realistic feel to them.