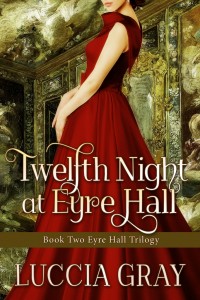 The start of Twelfth Night at Eyre Hall finds Michael at sea and not caring if he lives or dies and Jane miserable and alone at Eyre Hall. She is now married to the odious Mr Mason who drinks too much and sexually exploits the staff during his mercifully infrequent visits to Eyre Hall.

Jane finds solace in the companionship of Nell, daughter of one of the servants. Michael’s sister, Susan, is in trouble and after his heroic deeds at sea he is promoted to lieutenant and sent on leave to see her, which brings him back to Eyre Hall.

I don’t want to say too much about the plot as it will give too much away suffice to say there are relationship dramas, of the type that always seem to fill the lives of the gentry at that time. Mystery and intrigue, when Michael is sent off on a mission for Jane, death, kidnapping and mysterious strangers arriving with ransom demands.

The writing is solid throughout and in keeping with the period in which the story is told and I like the way Gray doesn’t spoon feed her readers. Chapters are told from different characters’ points of view; however, these aren’t signalled but instead revealed by the writing itself.

If you enjoyed the first part of this trilogy this is a great sequel and I’m keen to see how the story will end in the third part.