Some of my most creative thoughts happen when on a dog walk, as do my best conversations with my dog-walking buddy. So I thought I’d invite some of my author friends along to join me and my girls and see if I can find out a little more about them and their books. 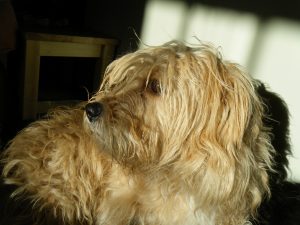 Poppy running up to me 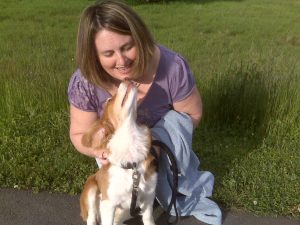 In halcyon days BC (before children), Barb Taub wrote a humor column for several Midwest newspapers. With the arrival of Child #4, she veered toward the dark side and an HR career. Following a daring daytime escape to England, she’s lived in a medieval castle and a hobbit house with her prince-of-a-guy and the World’s Most Spoiled AussieDog. Now all her days are Saturdays, and she spends them consulting with her daughter on Marvel heroes, Null City, and translating from British to American.

Hi Barb, thanks for taking the time to talk to me today. I hope you’ve had a good journey here and you’re ready for a hike across the fields of sunnyish Cambridgeshire?

Good to meet you Georgia. I am and I’ve brought Peri along for a walk too so I hope your girls are friendly. 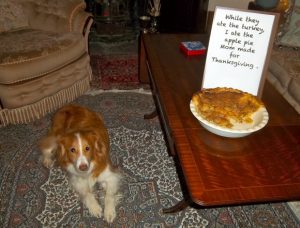 So now we’ve got going Barb tell me all about Null City and the special gift package of your Null City stories that you are releasing.

Well Georgia the blurb for the Null City series goes like this:-

Superpowers suck. If you just want to live a normal life, Null City is only a Metro ride away. After one day there, imps become baristas, and hellhounds become poodles. Demons settle down, become parents, join the PTA, and worry about their taxes. But outside of Null City, now that the century-long secret Nonwars between Gifts and Haven are over and the Accords Treaty is signed, an uneasy peace is policed by Wardens under the command of the Accords Agency. 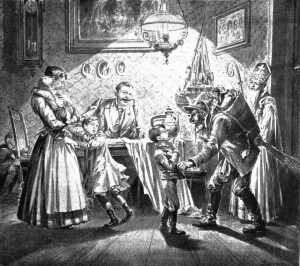 Christmas in Austria is not for the faint hearted. While a familiar St. Nicholas does make the rounds, in many Germanic traditions he’s accompanied by a terrifying beast called the Krampus whose job is to punish – and even take away – naughty children. With his curling horns, long red tongue, and tail, the Krampus is enough to chill any heart. [Krampus and St. Nicholas visit a Viennese home in 1896 photo credit: public domain]

As the villain of Don’t Touch, the Krampus is a monster who literally feasts on the fear and terror he inspires in children. The demon who threatens Stefan and Lette is a cornered beast, an anachronism whose ever-diminishing influence only makes him more desperately dangerous.

The other inspiration for this story is the image of Rapunzel. But in Don’t Touch, Lette isn’t the helpless girl awaiting rescue by her prince. Instead, I go back to the origins of the folk story in sources such as Giambattista Basile’s Tale of Tales  from 1616, where she is actually the hero who rescues herself and her children, and then saves her lover. Like her earliest predecessors, Lette is a tough, self-reliant young woman who tells her would-be prince, “If I need rescuing, I’ll do it myself.”

In honor of this holiday season, my publisher, Hartwood Publishing, is offering a special gift package of my urban fantasy Null City stories. Not only are they releasing the two newest stories as a $0.99 set, but my holiday-themed Don’t Touch will also be available at the sale price of 99-cents. (£0.72 in UK)

In Payback is a Witch, Claire Danielsen is a young witch whose goddess is house cat of unusual size. Peter Oshiro is a Warden policing a delicate truce between those who are human and those who… aren’t. It just would have been nice if someone told them the angels were all on the other side.

In Just For The Spell Of It, he’s an ungodly soccer-playing card sharp on a mission from God. She’s a beautiful punk fairy princess with her own daytime radio talk show and a missing baby sister. Partnering just got personal.

In most of my stories, an animal companion plays a prominent role—from George, the grumpy cat in Don’t Touch, to Bygul, the bitchy feline goddess of Payback is a Witch. My own life has been immeasurably enriched by my dog Peri who came from a shelter in eastern Washington State, and by the friends (feline, canine, and the occasional rodent) rescued by the dedicated members of many shelters.

In thanks, therefore, all royalties from sales between now and January 1, 2015 from Don’t Touch as well as the newly released set (Payback is a Witch and Just For The Spell Of It) will be donated to the following wonderful organizations:

That’s terrific Barb. What genre do you write in? And are these standalone’s or part of a series?

My daughter and I have this tiny little life-altering addiction to superhero movies. Okay, we’d probably starve to death with chocolate only a room away if a Marvel hero was in front of us. (Except Hulk, of course, because that would be just wrong.) But in general, give some guy a spandex outfit and a mask and he owns us.

One night we started talking about superheroes with awkward powers. Let’s say you are the Man of Steel, but you don’t dare have sex with Lois Lane because your LittleMan of Steel would probably split her in two. (And we’re not even going to discuss the havoc your Swimmers of Steel could wreck on Woman of Pasta…)

The point is that when you think about it, most people with special powers would be lining up to get rid of them and get their normal lives back. That’s where Null City comes in. After one day there, those with extra gifts turn into their closest human counterparts. For example, imps become baristas. (Of course, they’re now ex-PhD candidates in literature or classics who claim to be experts on third-world coffee blends and obscure world music groups. But hey – there is only so close to human that hellspawn can get…)

So the idea of Null City is that it takes our fantasy worlds and turns them into normal life. My daughter Hannah (aka obsessive cowriter) and I talked about Null City through her last year of highschool. The one thing we couldn’t figure out was who the villain would be, when everyone is a hero. The problem with heroes, though, is that they don’t all have the same goals. What if each group – angels, superheroes, and just plain humans – is willing to do whatever it takes to make their right thing happen?

So Hannah headed off to University in Scotland and I headed to my computer. One year and many hours of video chats later, the first Null City book, One Way Fare, was published by Taliesin (now Hartwood). Its backstory is the founding of Null City.

In the second book, Don’t Touch, the backstory is the Metro train, Null City’s connection with the outside world. Book three, Round Trip Fare, will explore what happens when saving Null City might mean destroying the world. In between, there are stories that fill in the gaps with several supporting characters. Among those are the newest releases, Payback Is A Witch, and Just For The Spell Of It. All stories are urban fantasy, often with a twist of steampunk. They have plenty of romance, at a temperature closer to sweet than spicy.

We’re all busy in this business and I know you often seem to be moving between the UK and USA so how do you manage to fit in the process of writing around your working and home life?

There are other terms for it, but I like to say I’m gainfully unemployed. Basically all my days are Saturdays. And since I like to write on Saturdays, it works out pretty well.

We all need help at various stages of writing Barb and I’d like to know more about the team you have behind you. Who helps you pull your books together until they’re ready to be published?

My daughter Hannah came up with the original concept for Null City, and she was co-author for the first book. She’s busy with school and life now, but remains my best sounding board. Her sisters are also writers, and their critiques and advice are invaluable. And of course, some of my best and most amazing help comes from my incredible critique partners and beta readers. But probably the most helpful in turning words to published books are the incredible team at Hartwood Publishing. There is no way I could begin to replace that level of professional editing and advice. And did I mention their amazing cover artists?

Which character in your books do you most relate to and why? If you want to talk more about your other books here Barb that would be great!

She has a fairly small role, but I love Lette’s mom in Don’t Touch. I think she’d invite me to her house for dinner—she makes a mean pot roast—and we’d commiserate with each other about our lack of grandchildren. In the face of the completely impossible, her mom is just so normal and practical. When Lette complains that she can’t ever touch a lover because her touch will turn them into something different each day, Mom replies, “First of all, you can touch anything you want. I read that there are more nerve endings in the lips than in the fingertips.” She pursed her own lips. “And actually, more in the clitoris than either of them.”

Night owl. I know that it’s theoretically possible to write during daylight hours, but I’ve never done it. On the other hand, living in Glasgow where we get about 3 hours of daylight in the winter, makes that a definite plus.

If by slippers, you mean mismatched old socks and some backdoor Crocs to walk the dog, then yeah. I rock them.

Which superpower would you like to have? And why?

I’m pretty certain that my uterus is already a super tracking device, since I’m the only one in my family who can find things. As a side effect, it appears to be the only organ in our collective familial DNA that can perceive an empty toilet paper spindle, uplifted toilet seat, or Mt. Laundry.

Do not let your picture be taken in the eighties. They were fashion’s darkest hours.

Actually, my perfect day involves all my kids visiting, but somehow still leave 24 hours free for writing. Daniel Craig would probably be bringing me coffee. Obviously, chocolate would be involved.

Brilliant Barb – you’ve made me laugh out loud! Thanks for joining me and I wish you every success for this offer and all your sales.

Thanks Georgia, it’s been good to get out in the fresh air!

You can find Barb here:-

And the book links here:-

Tales from Null City US