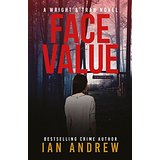 This review for Face Value has been delayed as I have made myself put off writing anything else until a certain word count was reached in my work in progress. I’m writing slowly, it seems each word is having to be dragged from the depths of my soul but the numbers are gradually edging upwards and I guess that is the main thing. So, a particular target was reached today which has freed me up to tell you about a book I finished a couple of weeks ago now, which is the first novel in the Wright & Tran series, Face Value, a crime thriller by Ian Andrew.

I met this author recently at a Telling It event I’ve written about here and I was particularly interested in reading his work as it is based in Huntingdon, which is the nearest town to where I call home. Here is my review.

The Wright of the subtitle of this book is Kara Wright and the Tran is Tien Tran. They are now private investigators having been combat veterans for an elite intelligence unit and I found that this is an action, rather than character, led tale. The story opens with a killing and a brutally efficient one at that and it is this part of the story, and the ongoing police investigation into the death, that takes place in Huntingdon.

Wright and Tran are hired by siblings Michael and Zoe to look into the disappearance of their parents and as a consequence they get to use their former training and while there is much to like about this book I think it was this that interested me most.

Wright and Tran have an extensive network of skilled help they can call on and I really enjoyed the detailed description of how they went about their investigation. There is extreme military precision at play here, a solid knowledge of correct procedure for covert surveillance, following suspects and obtaining the information needed to lay a trap to expose a network of crime and corruption. Clearly Andrew is an author who knows what he is talking about.

Alongside all of this the reader is kept abreast of the ongoing police investigation back in Huntingdon as the net tightens on the killer and I kept wondering all the way through how the first death was going to tie into the rest of the story as it seemed a little abstract but it did all eventually fit together and I thought the ending worked well. Although this is the first in the series be assured that there is a satisfying dénouement here along with a perfect set up for the following book(s).

This story would be enjoyed by all those who like plenty of realistic action along with well-written military style investigation that exposes a seedy world of crime and this author has done a great job.

If you would like to find out more and check out other reviews, here are a couple of links for you…