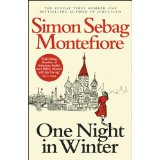 One Night in Winter is a work of historical fiction set at a particularly dark time in Russian history. Looking at his other works the author is obviously extremely knowledgeable on this period and there is an excellent section at the back which sets out the details of the facts and fiction in the story. However, he makes it clear that this book is not about power but about love.

Two children are shot and because they are the children of Russia’s highest leaders no stone is left unturned in the investigation as to what happened. The friends of the dead children are taken to the Kremlin to answer questions. The deaths are explained reasonably quickly but then a notebook is found the contents of which are ludicrously (in my opinion) over analysed and taken seriously. The children are kept and interviewed over and over as the week’s tick past and, as others are rounded up their parents, for all the high positions they hold, can do nothing. Such was the fear of the Stalinist regime.

Although this book is not about the power at the time it is difficult to get away from that as the politics overwhelmingly pervade all of life and Montefiore has done a great job at making the atmosphere authentic. It is also built on several true stories which add to the solidity of the story telling.

I enjoyed the love story elements when we eventually got to them. One particularly came out of the blue which I thought summed up the way people lived at that time. Secrecy ruled. Rooms were bugged, there were spies everywhere and punishments were harsh. It wasn’t safe to talk so the parents didn’t even get to ask each other if they knew anything about the fates of their children thus putting them under even more pressure.

Based so close to the actual history this story reassuringly feels very real which I like when I read historical fiction and I’d recommend it to all who are interested in this bleak period of time.

This post is here because of a second post I have put out today on Book Snobbery, if you want to see what that is about then please click here. Thank you.