I’m probably putting myself out there with this post but I feel I have to address it because I was accused of book snobbery not so long ago.

Book snobbery comes in many forms and I will deal with how it has manifested itself in my life a little later but I’ll start with the obvious book snobs. You know, those people who drop into the conversation the latest ‘must-read’ that’s all the talk in the right literary circles. Have I read it? No I never have. Those who will only ever be seen reading the classics, or something worthy. Those who only have the ‘right’ books on their shelves.

I don’t care too much what people think of me and to back this up there is a photo below that I took of a section of my bookshelves. I promise this is authentic and I very nearly left in place the massive, and dusty, cobweb I found adorning this corner but even I have some standards. I have eclectic reading habits and you will see here two trilogies you may have heard of. 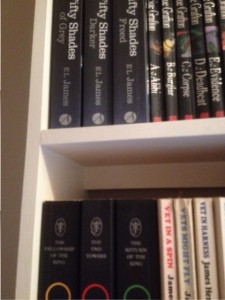 I read an article in a magazine ages ago on the Fifty Shades phenomenon and I wish, wish, wish I had kept the details of it for reference but I had no idea I would ever be writing a blog. Basically it slated the books condemning them and their BDSM content to the fiery pits of hell for the way these books promoted the abuse of women. At the end of the article the journalist stated that she for one would most definitely not be reading the books because of their degradation of women. She said all this and she hadn’t even read them. She hadn’t even read them!! I was honestly surprised the magazine had even printed it.

I am unlikely to reread these books but they are on my shelf for a couple of reasons. The first is that I read these in the summer of 2012 and they were part of the series of events that kick started me to get on with writing something. And before you ask no, not in that terribly pompous way people have of saying well I can do better than that!! I had no idea if I could do better or in fact if I have. What I can say with some certainty however is that I have not sold over 125 million copies. I am also it seems in the minority of people who actually applauds E. L. James and says bloody well done. She was there at the right time with the right book so good on her.

I feel for her actually for having to put up with all the sniping and yes I’m sure the millions she has earned has softened the harsh words but… and this is a word to any writers who read this. How much do you love your characters? How much has it hurt anytime anyone has said something against them? So do we think E.L. feels any differently about her characters? I doubt it and yet she has had to put up with constant criticism about them.

Who the hell are we to sit in judgement of the work of others anyway? In my opinion it is just as well there are as many different types of writers and their books as there are readers and their choices.

The second reason why they are still on my book shelves is that due to my tardy housekeeping I have missed the boat on being able to pass them on. Oxfam has recently pleaded with the public to stop handing them in because they have had so many they have been able to build a fort with them. I can’t throw them away, sacrilege for any book so for the moment there they will sit. 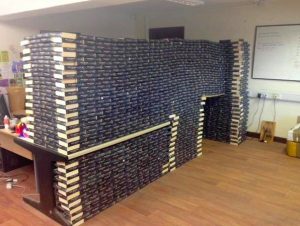 The second trilogy which the cover designers have not made quite so in your face and you may have to squint a bit to read is The Lord of the Rings by J.R.R. Tolkein, so that’s alright then. I can hear the collective sigh of relief, a bit of quality as counterbalance and that’s one to tick off on that top 100 list of books to read before you die. Tell you what though, I know which was more fun to read…and yes, I did just say that.

I’ve read a lot of books over the years but I am not particularly well/widely read. I can’t tick off that many from some of those terribly worthy lists people put together of the books you should read. I think this is mostly due to my laziness, it’s easier to pick up and get into the latest thriller than have to engage brain and concentrate on something a little more literary. It’s also down to the fact my reading time consists of the last 20 minutes at night and, with the alarm clock set earlier than necessary, the first 20 minutes of the day, hardly ideal conditions for concentrating.

I read most on holiday, but this is definitely not the place for highbrow reading I have found after struggling to get excited a few years ago by the several chapters that covered a letter arriving in a village in Emma. However, as Pride and Prejudice is one of my favourite all time reads it’s not like I’m not capable of absorbing myself in Austen, in that case I’m sure it was time and place. My lack of reading pedigree is something I plan to improve over what remains of my lifetime but only out of interest, to see other types of writing, study the way other authors go about things than having been seen to have read a certain book.

So I’m back to the point of this post which was about my book snobbery. I was accused because since I published my own books independently I haven’t read anything else that wasn’t written by an indie or small press author. There I’ve said it…it’s an inverted form of the usual book snobbery but it’s there all the same. So I thought I should do something to counteract that accusation and I have therefore just read One Night in Winter by Simon Sebag Montefiore which is published by Random House. 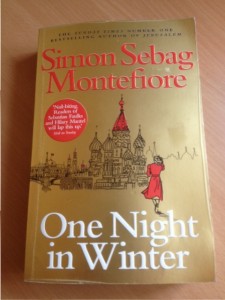 What would you do if your children were forced to testify against you?

Moscow, 1945. As Stalin and his courtiers celebrate victory, a teenage boy and girl lie dead nearby.

But these are no ordinary teenagers; they are the children of Russia’s highest leaders.

Is it murder, suicide or conspiracy?

So begins a terrifying witch-hunt which unveils secret love affairs in a world of merciless power where the smallest mistake is punishable by death.

Of course it has a host of wonderful quotes littering the back page, some of which I agree with, some seem a little over the top.

I feel a little foolish writing a review for this but as I believe in equality in all things it is only fair that I treat traditionally published books in the same way as I do indie published ones. Otherwise I am just lowering myself to the same level of all those who won’t do the same in reverse or indeed often and rather sadly refuse to have anything to do with an indie published book.

My findings? Well my heart sank a little to find the List of Characters stretched to four pages but I enjoyed the read. I will say however that I didn’t notice a stark difference between reading this and a well written indie book. So there wasn’t any ‘so this is what I’ve been missing’ revelation. To read my full review please click here.

I had intended on reading several traditionally published books in time for this post but at 448 pages this was the only one I managed but I’d be interested to hear your views. Do you scour the literary columns to find out and read what’s ‘hot’? Do you read what certain critics tell us we must? Or do you read books you feel you shouldn’t and only discuss those you think you should? I think we should be told 😉

14 Responses to Book Snobbery comes in many forms #writerslifestyle #amwriting