A Lecture by Dame Hilary Mantel 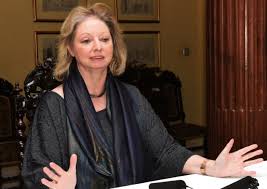 Dame Hilary Mantel (with copywrite to The Hunts Post)

Last Saturday, the 2nd May 2015 was the exact day of the 450th Anniversary of Hinchingbrooke School, formerly Huntingdon Grammar School. I did not go to this school but my children did, in fact my son is still there, and in his last term. The sixth form is housed in the rather splendid Hinchingbrooke House and it is an aesthetically beautiful setting for learning. 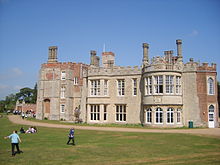 Among its pupils in the early days were Oliver Cromwell and Samuel Pepys but it is the Cromwell family that have been most connected to the school and it is because of that connection the school were able to lure Dame Hilary Mantel to give a lecture there, which I attended.

Now, I have a rather linear mind and am a completer of things so I have always struggled with learning history. I would have liked to have started at the beginning and followed everything through chronologically but I do realise that is not possible. At school I remember ‘doing’ the Romans followed by the feudal system, then something about the industrial revolution. It never seemed very joined up so it was a great delight to listen to Mantel talking so enthusiastically about the Cromwell’s and what had drawn her to writing about this part of history.

Dame Hilary Mary Mantel, DBE FRSL, is an English writer whose work includes personal memoirs, short stories, and historical fiction. She has twice been awarded the Booker Prize, the first for the 2009 novel Wolf Hall, a fictional account of Thomas Cromwell’s rise to power in the court of Henry VIII, and the second for the 2012 novel Bring Up the Bodies, the second installment of the Cromwell trilogy. Mantel was the first woman to receive the award twice, following in the footsteps of J. M. Coetzee, Peter Carey and J. G. Farrell. The third installment to the trilogy, The Mirror and the Light, is set to be published in 2015.

Mantel’s particular attraction to the Cromwell family was because of the questions raised by the life of Thomas Cromwell, 1st Earl of Essex, KG, an English lawyer and statesman who served as chief minister to King Henry VIII of England from 1532 to 1540 but who had been born the son of a blacksmith. How did that happen? Thomas was the uncle of Richard Cromwell who made his home at Hinchingbrooke. 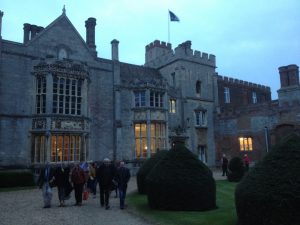 I particularly liked one question when Mantel was asked how much time she spent trawling through the archives on research. She answered that whilst that conjured up a wonderful picture that she liked very much of her hunting through dusty records and being thrilled at discovering a long lost parchment of great historical significance the reality was that it came down to various trusted resources and the internet…

Mantel had been treated to a tour of the house during the day, seen the skeletons (yes, the school really does have them!) and was able to touch the copy of the original lease of the school what was on display, the rest of us were not allowed to do that. The reason for her increased interest is that she is planning on using the house for a setting in the last part of her trilogy…so we shall wait and see if it makes the final cut.

I came away feeling enthused and yet again regretting giving up history so early in order to pursue my love of all things science based. I should pick it up again shouldn’t I, but where on earth would I start? Did anything happen before the Romans?

You can see the full write up in The Hunts Post here.