Ask anyone in the UK and they will tell you it has been hot this week. Whereas elsewhere in the world this is simply known as summer, here, it is known as a heatwave. 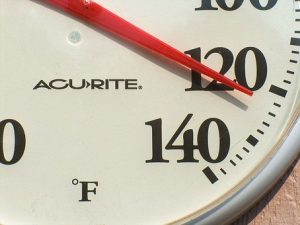 I found this photo (courtesy of Pixabay, thank you) and realised that much in the same way as I have no understanding of my weight in kilograms I also have no idea what this means compared to Celsius, other than as it’s nearly off the chart I’m assuming it must be hot.

There are already comparisons being made to the summer of drought in 1976. I was around then, I remember it, and the summer was endlessly long and hot and dry. But weren’t they all back then? Those summers of our childhood. The 1976 comparison was being made on the morning news this week, and yet we had only had four days of heat at that point…

I remember exactly where I was when it began to rain in 1976. I can picture it. I was at Fountains Abbey near Ripon. My brother and I were staying with my aunt, uncle (he was cool, and only ever had VW Beetles) and cousins and we had gone out for the day. It was late afternoon, we were walking through the parched grounds and the heavens opened. No one dived for cover and I remember stretching my arms wide as I walked through the rain lapping up every drop that fell on me.

I remember that wonderful smell that rose from the earth. Petrichor, I now know it is called but back then it was simply that deliciously sweet scent that rises when rain falls on dry ground.

I’m writing this on Saturday evening. The windows are opened wide and I have a glass of wine at my elbow. It’s not my first and I’m trying to remember what I’ve been doing this week.

One thing that has happened is that I have put The Joker wide via Draft2Digital. If you read via Kobo or on a Nook or just prefer to buy your books somewhere other than Amazon (although the book is still available there!) you can now get my Grayson Trilogy Short Story on this Universal Book Link:

A Single Step will be following very soon, with a bit of luck and a prevailing wind. More on that another time.

Other than that it has been the usual, blog post writing and sharing, and dealing with the usual emaily type stuff, and Twitter and Facebook and the rest.

And, I’ve started concentrating on the writing, on the need to get some words down every day and I shall get into the habit. Just as I’ve done with getting so many blog posts done each week I shall get back into the habit of writing and adding to my manuscript each day. It’s not really flowing yet, not like it did once upon a time but I’m hoping it will and I long for the time when the words pour out of me rather than having to be fetched one by one.

For the moment, this is where we are: