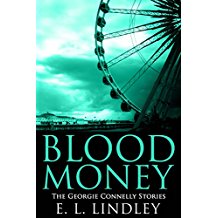 I felt Blood Money took a different turn to the previous stories in this series. Marilyn, Georgie’s overpowering mother, reveals a huge family secret to Georgie which sees the two of them, and Georgie’s boyfriend James, travel to visit Aunt Serena in London, and this is where the rest of the story takes place.

I don’t want to reveal any details about the secret but when they set out to try and trace a missing person the situation that person has found themselves in becomes more and more problematic and sinister. Help arrives in the form of Eric and Callie and then later when Julie and Sean turn up and although I breathed a sigh of relief that the gang were back together again they find life difficult because they are working in an unfamiliar country. I should add that I found their desperation to find a decent cup of coffee highly entertaining.

Before the team know it they are mixed up with the most unpleasant Des and involved in the shady world of the Triad. Although the previous storylines have had at the centre of them Georgie’s documentary making career this takes a backseat in this tale and there is considerably more violence and bloodshed than there has been in the earlier books of this series. I loved the darker edge though, and also delighted in seeing a character from another series I have enjoyed make an appearance.

Georgie is the same infuriating and impulsive person she has always been and how the tolerant James puts up with her I will never know. But this story also ends with Georgie in trouble with the law which adds a further complication into the mix. I always highly recommend Lindley’s writing. It’s descriptive and flowing, the characters consistent and well rounded, though don’t just take my word for it, try it for yourselves.