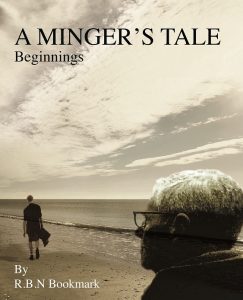 There are many reasons why someone writes a book and for this author it was the death of his father that was the trigger for him to start telling his story in A Minger’s Tale which is in the form of a memoir, and this, as the subtitle promises, covers the early days of his life, from the 1960’s to the 1980’s.

I was a little behind on some of things this writer experienced for two reasons. Firstly, I am a few years younger so my terms of reference are a little off, and secondly, we grew up in very different worlds. Ribban, for that is what everyone calls him, was born to strict, hardworking Irish immigrants and was brought up on the harsh council house streets of Manchester, while I was not.

I really enjoyed the reminiscences of his family and of a childhood growing up among the regeneration (or as he calls it disintegration) schemes that gave the local children an unusual playground of empty houses awaiting demolition to play in. Ribban was a naughty child who struggled to settle into school, and later into work, and he was in and out of hospital which set back his education. He talks candidly about the corporal punishment he endured (something seen as perfectly normal at the time) and about being rubbish at maths and with women, although that became more apparent later on. I have to add that I absolutely loved his mother – her defence of him when he started at St Iggy’s was priceless and the time when she went to get a job – I could picture her perfectly.

The things I did not enjoy so much was the author putting himself down all the time by using the term minger. As we are told at the beginning of this book the British slang definition of this term is someone who fell out of the ugly tree at birth and hit every branch on the way down. I suspect some readers will also find some of the one liners a little cheesy. But you know what this is an honest book, telling things like they are so I guess these are pretty true to life.

There is so much to comment on as you read this book, unemployment, riots, the effect the Thatcher era had on the North that it’s well worth a read if only to compare lives and experiences during this time.

Here are the links…

2 Responses to #Bookreview for A Minger’s Tale: Beginnings by R.B.N Bookmark @rbnbookmark #RBRT