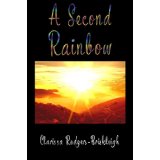 A Second Rainbow was a terrifically fun read. I really like this authors writing style having read some of her other work and from following her blog where she has been tirelessly researching the dating scene for those of more mature years. This is a writer who has walked the walk and that comes across in this well written book.

We follow Dorothy on her second time around journey in discovering love, lust and everything in between after her marriage fails. This tale is structured around the story of The Wizard of Oz (hence the Dorothy bit, is anyone called that nowadays?) anyway this worked very well as we met and experienced the various men that Dorothy dates.

I happily sailed through this book and was so fully absorbed in the storyline that just like Dorothy I didn’t see the twist coming, not at all, I should have done of course, well because… no I won’t spoil it but it was very well done.

I loved the relationships Dorothy manages to keep, forms and maintains and though her story is very different to mine I have a feeling that should we ever meet we would get on famously. A highly recommended read with great insight into finding that second rainbow many seek.

To get your copy…go on, I know you want to…