#Bookreview for After the Sucker Punch by Lorraine Devon Wilke @LorraineDWilke 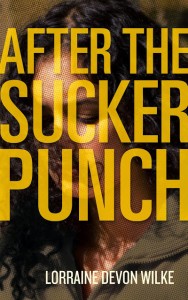 ‘a dubious gift from a dead man who had little to say while living but clearly plenty upon departure.’

I finished After the Sucker Punch a while ago and have been pondering on this review. Without going into detail this was a painful read for me but I don’t hesitate in highly recommending it because it’s thought-provoking and exceptionally well written. There’s also a wry humour throughout which I thoroughly enjoyed.

Tessa is the fourth, out of six, children and the story starts at the wake following the funeral of their father, Leo. He left a large number of very personal diaries in the pages of which he did not hold back on his feelings about his family. He was clearly well educated and his words eloquent so it begs the question not so much as to why he wrote them but that if he was unable to express his feelings in spoken words and chose to do it this way why he didn’t make more of a point of sharing the diaries with his family while he was alive as apparently he had written them to be read. Maybe he was concerned about the impact they would have but if that were true then surely he would have held back on writing down some of his thoughts, or simply not wanted to share them after.

We find that some of the siblings have read all of them and as sister Suzanna so ominously declared, gained some perspective, while others had read none and remained blissfully unaware. Tessa has read some and is eager to read the rest to see if her father’s view of her had changed at all…however it turns out that this is not that easy to do.

The children are now all adults and in this terrific novel is an exploration of the relationships between the siblings, and of those between them and their parents.

Tessa is hit hard by what she reads, unsurprisingly, though I found myself frustrated by her level of self-absorption, wanting to yell at her ‘What does it matter what he thought? Get on with doing what you want.’ But like I said that might just be me. At other times I found myself envying the time she allowed herself, the lengths she went through to work it out.

I thought all the characters, both family and friends, in this story were strongly written and the characterisation unwavering so that you had an absolutely clear picture of everyone. I particularly liked Ronnie, Tessa’s younger brother, and Aunt Joanne, nun and therapist.

This is an elegant novel with everything in balance, each word perfectly positioned to maximum effect and I don’t hesitate to recommend it.

But don’t just take my word for it, check it out for yourselves…