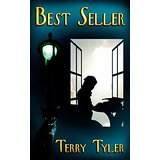 The world of publishing is a competitive one and this book tells the story of three, very different, writers and what they are willing, or sometimes forced, to go through to get that elusive best seller. What I always enjoy about Tyler’s writing are her spot on characterisations, and this book is packed with gems.

The over-indulged daughter of a wealthy family whose money has come from construction, and the rather shady past of her father, Eden Taylor has already made it, and is fast becoming the darling of the media. Eden herself is rather faded by comparison with the lurid vulgarity of her family who are described so perfectly you can see them in all their garish leopard skin, gold-dripping, boy-done-good detail. Like most parents they only want what’s best for their daughter and the word no is not an option as far as her father, Mick, is concerned when it comes to making his little girl a star.

Jan Chilver is at the other end of the scale. Poor, and working a factory job to make ends meet, Jan lives a rather solitary life in a basement flat. She has written a couple of novels but having little money has self-published them with home-made covers which has brought them to the attention of pretty much no one at all.

Becky Hunter lives with her rather profligate boyfriend Alex, who seems unable to curb his spending habits however hard Becky tries with him. She is very well balanced and I liked her a lot but Alex sees her writing as a way out of their financial mess, at whatever cost.

The writing community of the North Norfolk Novelists is a link between the three, but it is not the only one and as the story progresses the twists keep coming. I don’t want to say anything that will give any spoilers but I will say that this is a little treasure at an astonishing low price. Whether you read or write download this now and you can thank me later. Tyler knows this business and tells this tale in all its cynical glory brilliantly. There is not a word out of place and I loved every single one of them. It should indeed be a best seller.