#Bookreview for Concealment by @RoseEdmunds #RBRT 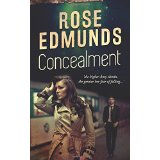 Concealment is a thriller based in the financial world of a large accounting firm called Pearson Malone and is written in the first person. Amy Robinson is a partner in this firm and right from the start of this story she believes she is living a lie due to the upbringing she endured in her childhood home life, the knock on effects of which are coming out now that she is under a lot of stress.

At the beginning this setting reminded me of my time working in an office and the politics that are the undercurrent of such an environment. Such politics can make for an unpleasant work life and they are one of the reasons I choose to work alone. However at Pearson Malone they are taken to another level altogether and what starts off as mild manipulation and blatant, if suspicious, favouritism grows into something much, much worse as a member of staff is murdered and a culture of blackmail, threats and cover ups is revealed all in order to allow a big and extremely lucrative deal to go through.

This is a very tidy, well written book, the prose spare and efficient which I liked and I felt very much depicted Amy at her most organised. The character descriptions were vivid and very real; I could absolutely see these people, and most of them were terrible. Smithies made me shudder, the very worst kind of patronising bully, Lisa…well…let’s just say I’m not a fan.

Amy drinks too much and because of her actions gets caught up in the murder enquiries. When her suspicions are raised she reluctantly starts investigating the possible reasons behind the murder and discovers more than it is safe for her to. This leads to attacks being made on her life…and this is where I had a bit of a problem. Edmunds is very talented at building consistent and believable characters. She also did an extremely good job of the build up of the paranoia in Amy’s mind as she comes to believe everyone around her is involved in fraud and covering up for each other. But I would have liked there to have been more made of the attacks themselves and of Amy’s reaction to them as those parts of the story passed very quickly and she seems to brush them off when one in particular is not something that happens to you every day on a British street.

Amy not only has problems at work but also a situation arises with her mother which again Edmunds deals with extremely well showing a consistency of thought throughout the story which is totally believable.

Amy starts to hear a familiar voice right from the very first page, (I really liked this) and this manifests into her seeing a figment and eventually as she nears the edge of her own sanity and is close to a breakdown she finds herself acting on the figments instructions.

I’m not that keen on being told very obviously at the end of a chapter of the fate that lies in wait for a character but that is a personal thing and I can see it builds tension and I’m sure other readers will like it. I have to say that I loved the ending, the way Amy, and Edmunds, dealt with that last meeting…brilliant!!

If accountancy isn’t your idea of the ideal basis for an exciting thriller then think again and don’t be concerned about having to deal with the intricacies of tax fraud you don’t need to be all over that to enjoy this very well thought out story.

I received a copy of this book in exchange for an honest review.

And here are the links for you to go treat yourself:-

4 Responses to #Bookreview for Concealment by @RoseEdmunds #RBRT