#Bookreview for Destiny of Angels by Wendy Steele @WendyWooauthor 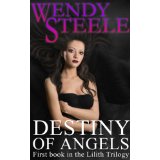 Destiny of Angels is the first book in the Lilith Trilogy and starts with the most wonderful quote which I have to admit I skipped over initially but fully appreciated once I’d finished the read.

The story starts with Angel Parsons revisiting her old school for a reunion. She had suffered at the hands of others while at school and had decided with the help of the friends she now has around her to offer the opportunity of redemption to those who had caused her such pain. I really liked the idea of offering redemption rather than seeking revenge because the choices made by those that had wronged her, Clare, Rob, Tiffany, Justin, Danielle and Vince sealed their fates.

The rather gorgeous friends around Angel are her partner, Aidan as well as Sophia, Maddy, Eli, Zack and Jed. Angel’s one childhood friend from school, Jenny, also gets drawn into the group, together with her brother Tim.

I thought the writing throughout this book was very good indeed. Although there is a lot of detail at times there is a richness and succulence to the descriptions, particularly those set over Christmas, which draw you in. I have chosen this snippet to share with you.

‘Lazy waves shuffled up the beach, cleansing the fine white sand before sauntering back to the ocean. The day shone clean and bright. Palm fronds swayed beneath a cerulean sky and the hot sun melted into it like a pat of organic butter.’ Lovely.

I am not particularly interested in witchcraft or the occult and I know next to nothing about it so I did get a bit lost during some of the ritual scenes. However Steele has very cleverly linked several of the words used to a glossary at the back so that you can quickly find out what something means. This therefore has the added extra of being a learning experience which I wasn’t expecting and is unusual in a book of fiction.

I was going to say I’d highly recommend to all those who like fantasy, magical stuff, witchcraft and demons but on reflection I’m not that keen on that sort of thing usually and I thought this was great so open your minds and give it a go. You never know you might just like it!