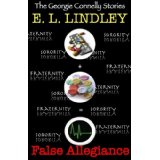 If there is one word that sums up Georgie Connelly for me, it would be irrepressible. However, in False Allegiance, the fourth book in this series and certainly at the start Georgie is more subdued than usual because of what happened in the previous story. The relationships around her are changing with sadly those closest to Georgie and her partner James facing some challenges. Emotions are running high and Georgie doesn’t do subtle.

Georgie is at a loose end with no interesting projects on the go and everyone else embroiled in their own work or struggling to deal with other issues. As she tries to find something to focus on she catches up with Melvyn, her friendly taxi driver, who has been avoiding her and finds out that he has been ripped off by a girlfriend and when Georgie investigates further she starts to uncover the dirty secrets of the university campus. I enjoyed finding out about the fraternities and sororities having heard words like Alpha Zeta and Sigma Tau but with no real understanding of what they were. Sadly, getting accepted into one of these houses seems to be all about class, having money and being the right sort of person and there was me thinking that was a British thing.

Georgie is soon back to her usual tenacious self as she hunts down the truth in a story that involves drug taking and murder. The usual cast of well-formed characters is back with Georgie acting as the volatile catalyst in a plot that has the others struggling to catch up and as usual there is friction between her and James although at the same time some signs that she is mellowing into their relationship. Georgie’s mother, Marilyn, is back to stir things up again and with her comes great entertainment. I also relished Sean’s role in this story and the new character, Martha Chapman.

What I really enjoy about these stories is that as well as Ms Lindley telling a great tale she also does a very good job in moving everyone’s life on and it’s done so realistically you actually imagine these characters as a group of family and friends. Although you can read each book as a standalone if you read from the beginning of the series you see the development in the characters and I’d definitely recommend you do that. By the end of False Allegiance Georgie is back to her normal self with another project in her sights which no doubt all those around her will get involved in. I’m already looking forward to it and highly recommend this series.

Here are those all important purchase links

2 Responses to #Bookreview for False Allegiance by E.L. Lindley @LindleyE