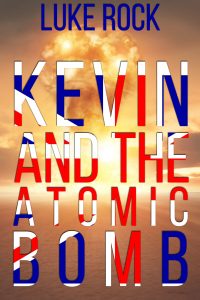 I’m always impressed when someone manages to publish something topical and Kevin and The Atomic Bomb covers the first ten days following the Brexit vote. There is a note at the back which tells the reader that it has been previously published (back in 2012, with a different title and author name). It was then withdrawn, and has been substantially and significantly rewritten. Only the characters and plot remain intact. The perspective, point of view and prose style has radically changed and there are significant additions.

This book is aimed at the 19-25-year-old market, the vast majority of whom voted Remain and have had the Leave vote thrust upon them. I am not in that age bracket but I thoroughly enjoyed this read. So much so that I couldn’t help but skive off for a bit this afternoon to finish it as the pickle I’d left the characters in was playing on my mind.

Kevin Taylor, the hero of this piece, is sent to London with his best friend Ricky to pick up two secret packages that have been donated to their protest group. He suspects he’s only been sent because Lance, the leader of the protest group, fancies Kevin’s girlfriend, Rachel, and wants him out of the way for a while. However, when they meet up with the mysterious contact, Verna, there are three boxes are waiting for them and their problems are only just beginning.

There are wonderfully descriptive passages throughout this book that capture a setting, a situation, or in this example, a smell perfectly.

‘The Lizard wears an old-fashioned purple smoking jacket sealed with a crimson cord that dangles to his knees. He looks gaunt. The place smells of socks, of urine, of takeaways, of beer, of cigarette smoke, of underpants and six-month-old pieces of battered cod escaped from a fish supper down the back of a sofa. It smells of age; Old furniture and wallpaper. Dead people passing.’

There’s plenty of humour, quick one liners, little pieces as minor characters get to distract and entertain the reader for a while.

But the main joy of this read is in the strength of the characters, all of whom are superbly drawn. Not only in their appearance but in their motivations, reactions, emotions and thought processes. Kevin is my favourite. He is adorable but an innocent. He is so lost when Ricky gets taken ill as they have a close and supportive friendship and when it all starts to go wrong with Rachel he doesn’t know how to deal with his feelings and you just want to give him a hug. Kevin adores his mum who equally dotes on him but she’s ill, which is a worry, and he also has nosey neighbour and his mum’s companion, Mr Fothergill to deal with, as well as the local bullies.

I had absolutely no idea how the author was going to manage to deal with ‘the third package’ and resolve the situation in any believable sense but he did and hands up, he’s done a great job. I highly recommend to all those who like intelligently written story-telling with a terrific cast.

Here are those all important links, go on, you know you want to 😉