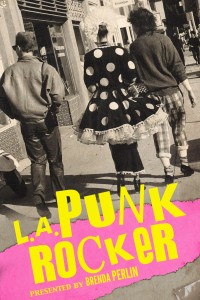 I love the sound, the look, the feel of punk rock and in L. A. Punk Rocker Brenda Perlin and her friends relive their memories of a time and lifestyle that had the same music at the heart of it but compared to my life couldn’t have been more differently lived. Yet it is all relative as the same challenges faced us all from wanting to fit in, or not, to battles with our parents.

Perlin gives us her teenage recollections in Vintage Punk. A down to earth depiction of what those years were all about from battling with strict parents to being out on the streets at night with the punks. Her second story Tropicana highlights the motel of the same name where anyone who was anyone lived and partied. L.A. Punk Queen delves deeper into the nightclub scene, as well as the clothes and the lifestyle. I loved that Perlin hated disco music as much as I did and am deeply envious of the number of bands she saw and hung out with. Here’s a taster…

“We didn’t have the world’s problems on our shoulders, only small everyday growing pains with so little responsibility, and had yet to experience real troubles. Like most teenagers, there were complaints, but we were pretty much carefree. Our rebellion was so serious in our minds, but in actuality, we were looking to have fun, even if it was done a bit differently.”

The US Festival held in 1983 gets a chapter of its own and features Bono and U2. This is swiftly followed by the girls getting into a compromising situation in L.A. Punk Mayhem and then the Grungy Streets of Hollywood where trouble was rife but music was at the centre of everything. Local bands were also part of the scene as told in Bad Religion where Perlin starts going out with musicians. The stories are not all a thrill a minute good time tales as San Francisco covers the drug culture involved and a particularly nasty attack on one of Perlin’s friends. Punk is Dead does exactly what the title says, it depicts when it was over for Perlin and her friends. The music was becoming mainstream, the drug culture taking over and taking several of her friends with it – time to move on from the best days of her life. Perlin ends her tales with a Self-portrait of a moment at school which I think captures the thoughts and problems of many teenagers.

Steven E. Metz tells of his time in the Punk Bank Mad Society in a series of lessons – I particularly liked number 4 – Jumping into a crowd is a blast! Though 5 and 6 are pretty cool too but I can’t quote them all here.

Deborah Hernadez-Runions wrote Errol Flynn’s Estate which is a fascinating insight into this particular place where the punks congregated at night – until they were chased off by the police that is.

Cindy Jimenez Mora describes a typical punk night out (police are involved!) in A Night with Ceasar, who was the bass guitarist with The Stains.

Sandwiching this compilation are two stories from Mark Barry. Both are about Billy Idol, the King Rocker himself. The first where he is just about to go on stage in Los Angeles and describes in glorious detail that last five minutes that he takes for himself in a changing room steeped in the history of all the bands that have come before – and the list is a prestigious one. That last five minutes that he takes to prepare, to build up, to believe, the start of the adrenaline rush, that you can feel because the writing is so vivid, and that is about to propel him onstage and in front of the waiting audience riding high on anticipation and baying for White Wedding.

The second, Billy again, starts at the climax of a show on his comeback tour, One Night in Richmond Park, he sees a face from his past in the crowd and she’s waiting for him in his changing room. He chills at the sight of her and the meeting is electric for this is what Barry does so very well, the platonic patter between two people where attraction simmers not even just below the surface but right there. The way Barry writes his characters is brilliant; try this on for size…

“You take a look at her in the mirror. A shock of spikey blonde hair every bit as platinum coloured as your own, back in the day. She hasn’t changed a bit. No dye. It’s real. All too real. Unbelievably gavelled cheekbones – speed cheekbones, he thought at the time – as if they’d been sculpted. Sharp as knives, those cheekbones. Virtually no body fat percentage. A face you’d never stop touching, never stop kissing. A face that launched a thousand ships. Looking at her face was an aesthetic experience. Like art. You can’t stop staring. Red lipstick and burning brown eyes sheltered underneath two stud-pierced eyebrows. Her vest obscures a black bra with two fashionably displayed straps clinging to angular, pallid shoulders.”

Just the way she addresses Billy as William is sexy and I guarantee you will have Rebel Yell buzzing through your brain for days after.

This book has photos from the punk rock days scattered throughout it. Most of them are the personal photos of Brenda Perlin and add a lovely touch to a book brimming with true life and insightful tales as well as a couple of deliciously fictional ones about the King Rocker himself.

The purchase links (go on…you know you want to!) are…

5 Responses to #Bookreview for L. A. Punk Rocker presented by Brenda Perlin @BrooklynandBo