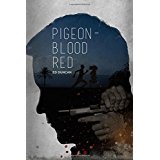 I was attracted to Pigeon-Blood Red by reading another review for it, which shows that reviews do exactly what they should, and I was then asked to read and review the book by the Whispering Stories Review Blog.

The main man in this story is Rico, the no nonsense enforcer of gangster, Frank Litvac. Due to the bungling of his less experienced partner Jerry, his boss’s priceless necklace dripping with pigeon-blood red rubies, falls into the hands of Robert McDuffie, a failing businessman and gambler who is deep in debt to Litvac. Rico is given the job of retrieving it, and teaching the thief a lesson.

Due to a mix up the retribution doesn’t go completely according to plan but when Rico is told to correct his mistake he has a change of heart and takes matters into his own hands.

I liked the premise of this story and it rattled along at a decent pace but because of this there wasn’t much by way of suspense building, and there should have been a lot with what was going on in it. For me the characters were a little flat and I find if you don’t have richly developed characters that react emotionally to the situations they find themselves in you really don’t care what happens to them. The exception to this was probably Jean who I had a soft spot for and I also particularly enjoyed Paul’s backstory.

This book would be enjoyed by those who like a straight forward gangster type thriller.

I received a copy of this book in exchange for an honest review. This has not altered my opinion of it one iota.

To find out more, here are some links