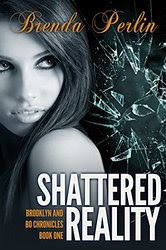 Shattered Reality is the story of Brooklyn and is a real life story told in an unblinking first person and very direct manner. The thing that amazed me most about this book is just how honest the author is in telling her story.

The first part deals with Brooklyn’s childhood and she is candid when she tells of the way she manipulated her family, particularly her mother, into getting exactly what she wanted. Arguments with her siblings were settled in her favour; she wiggled out of doing her share of the household chores which I would imagine did nothing to endear her to her sisters and handled her father’s anger by starting to cry. She leads her parents a merry dance as a teenager and while she believes they were strict, they were not, not by the standards I lived with, and she got away with everything.

My life, lived as it was then in a sleepy English village, could not have been more different and yet at several points our thoughts and feelings touched.

‘No matter what age I was, I believed I was old enough to do whatever I wanted, and I didn’t understand why I couldn’t live the way I chose to. I yearned for independence, which I fought for tooth and nail.’

The traits Brooklyn shows as she grows up are ones many of us would maybe not wish to tell everyone about but truth is at the heart of this book and for everything that’s written that might make us not like Brooklyn there is something else that draws us to her.

She tells of feeling like an outsider at school, right from kindergarten, of her first sexual experiences and of her naivety in dealing with boys. She talks of her difficult relationship with her father, of how self-conscious she felt, of how badly she dealt with her mother’s death. Then due to her insecurities how she made terrible decisions regarding her choice of men culminating with her deciding to marry Gerard.

Throughout the book she regales us with no holds barred stories of her family and friends and what she thought of them then as well as what sense she has now made of those situations from her viewpoint as an adult. I was fascinated to know if any of her family or friends had read this and what they thought if they did.

The second part continues 15 years after she got married. Life with Gerard is not great, then Brooklyn comes down with a debilitating illness which takes years to take over but once she is back at the gym she meets Bo and her life changes.

It is difficult to find sympathy with someone who labels herself as a home wrecker but I found I didn’t have to be sympathetic because I didn’t feel Brooklyn was seeking that. She was just telling it like it was, she makes no excuses for her behaviour and does not seek to justify her actions leaving it for other people to make up their own minds. I’ve always believed you can’t judge people until you have taken a walk in their shoes and so I’m pleased to say I didn’t judge here though for some I guess their own life experiences will colour their feelings over what happened.

I don’t believe I have never read any sort of memoir before and I found this to be a fascinating insight into someone else’s life. Something’s about Brooklyn’s behaviour annoyed me, others made me want to hug her but in the end this is a compelling story unflinchingly told and I really enjoyed reading it.

The links for loads more reviews and that all important buying button are:-

9 Responses to #Bookreview for Shattered Reality by Brenda Perlin @BrooklynandBo