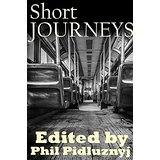 As previously discussed I am only dealing with short stories at the moment so I was delighted to find that the students of Nottingham Central College have been busy again and Short Journeys has hit the shelves, both virtual and actual. Here is my review.

Short Journeys is an anthology of prose and poetry from the students of Nottingham Central College and I’m always interested to see what work each group from this class manage to put out in such a short period of time. I believe it is only 10 weeks.

The Courtroom by N G Walters is a dramatic retelling of events leading up to Sierra appearing in the dock of the courtroom with well-told flashbacks to the crime and a twist in the ending.

Echoes From the Aftermath by S T F Birkin is set in Nottingham and is the descriptive tale of a woman who sees someone she shouldn’t then finds herself in trouble when her diary goes missing and she tries to get it back.

Djinni by Sadie Barr opens with the guest of a radio show, Helen Benz, telling all about how her writing career began. I enjoyed the appearance of Ginny, the humour, cultural references and general clarifications on what she offers and I liked the way the requests were spun so Helen wasn’t sure if at first she’d been duped or not.

Melting Moon by L K Cody is set in space, in the future, and is the fascinating tale of the discovery of a new world and of what happens to those already living there when the protagonist is given an order they cannot refuse.

Buck Munroe and the Beast of Scrubtown by L J Thorne is a macabre and descriptive tale from the American Wild West when a small town is plagued by a series of brutal slayings. Buck Monroe rides into town, as all good heroes do, and goes hunting for the creature reportedly carrying out the killings.

Blind Ambition by Adam Andzei tells the story of a man, suffering at home, over-looked at work and having to put up with a younger competitor in the latest promotion interviews. He snaps and I shall say no more for fear of spoilers. You’ll have to find out yourself if he got away with it.

Laceboy by Gaynor Taylor is a story for children and though I’m not I still enjoyed it. A wizard, Pete, his Faerie princess wife, Titiania and their tiny Witchling daughter lived in a castle and all was fine until Pete and Titiania went off to save the world leaving Witchling behind in the care of a small but eager spider called Webster. When they got held up and did not return things started to go wrong.

Ugly Richard by Scott Hall tells the excruciating story of what can happen if you are suspicious and overthink something as simple as an innocent invitation to a party. It makes for uncomfortable reading, and should be a warning to all.

The Visitor by J Anton is a thoughtful piece inspired by the Psychology of Erich Fromm and is a view of humans from the perspective of a visitor to this planet. It makes for a fascinating read and I found myself nodding along to it muttering, that’s so true. Though it seems we have found something worth living for here, but you’ll have to read it to find out what!

The Slow Walk Home by Novelette Williams is just as it says, the story of the journey home from work but it is more than that, incorporating the people she meets or sees on the way, the childhood memories evoked and the fears that make her reluctant to go home in the first place. I very much liked the ending of this one.

All these short stories have wonderfully descriptive and thoughtful passages in them which I thoroughly enjoyed. There is great diversity in the subject matter and in the telling of the tales so there’s something for everyone and it just goes to show what can be achieved in only a few weeks.

A range of poetry styles follows with long and short thought-provoking pieces and plenty of Haikus, an art in themselves.

One by S F Birkin

A Man of Plenty by Novelette Williams

A Prayer to Jesus by A Anton

Barry the Bear by Scott Hall

I Remember… by J Anton

Where Are We? By J Anton

The Philosopher by J Anton

If you want to take a closer look, you can do, right here…