#Bookreview for #shortstory Guts and Volts by Robert Bevan @robertbevan77 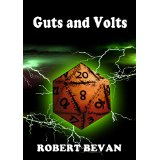 I read this short story Guts and Volts by Robert Bevan although I’m pretty certain that I am not Mr Bevan’s target audience having never played on any sort of gaming platform thingy. I have nothing against them, I’m just not interested. I’m also fairly convinced that I haven’t read anything set in the gaming world and wouldn’t be his typical reader. Undeterred however, I live by the mantra that I will try anything once and have rarely found this attitude to be a mistake. (Well we all know there have been occasions but this is neither the time nor place.) Anyway on this occasion I was to be pleasantly surprised. Although I do have one of his novels on my kindle as I’ve said before a short story is ideal for getting the feel of an author…ahem…so I decided to read this one, Guts and Volts, that arrived in my inbox via a newsletter, that I signed up to because I like reading Bevan’s blog and enjoy his posts.

Dave, my favourite, Julian, Tim and Cooper travel to a house to answer an advert ‘Wanted: Volunteer for magical experimentation. Subject will be rewarded handsomely.’ Dave is less than keen with the plan and as it turns out has good reason as they are faced with a Frankenstein type scenario.

It’s difficult to write anything too in depth about a short story but I shall do what I can. Okay so there are some references to game things – skills acquired and such like but they didn’t interrupt the story telling for me at all. There is a lot of laddish humour which I like but if you are offended by bad language and generally crude behaviour then this is not for you. I particularly liked the set up with the banter between the characters and I guess the only downside for me was that it finished far too soon, which is a good thing, right? Wanting more, always a good thing – so it’s just as well I have that novel of his.