#bookreview for Straight from the Heart, an #anthology of #prose and #poetry from the students of #Nottingham Central College @GreenWizard62 @PhilPid1 @NoveletteMW 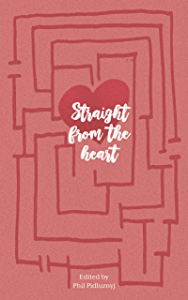 I shall start this by saying how much I like the cover, the maze showing that despite the title, Straight from the Heart, love, in all its forms, from finding it, to keeping it, is anything but straight forward.

What a superb start to this book! This is an absorbing tale of the acceptance by Life of Death and of the love between the real beings of Life and Death. Life gives gifts to Death who is saddened because she cannot reciprocate. However, Life already loves Death for the way she handles the gifts she gives her. Eventually Death unexpectedly gets the opportunity to give a gift to Life. This is a well written story and an interesting take on a love story with a difference.

The Silent Wife by Novelette Williams

Ruben is living a double life protecting a wife he can never see while living with a common law wife he has kept the truth from. He seeks hypnosis to find out what happened when he was injured and finds what is revealed hard to believe. This was an interesting tale on a complicated life but I did feel like giving Ruben a good shake for not telling Alice the truth in the first place, no wonder she was frustrated with him!

The Great British Snog Off by Manda Greasley

This was a great fun story about kisses in general and the snog in particular. A well written story it traces the timeline of snogging endured enjoyed by the narrator with humour and I loved the research element to it.

Getting Home by Adam Andrzei

This is a really good story because it leads you down the path of thinking one thing before the big reveal of what’s really going on. Touching and poignant with bits of well-timed backstory dropped in I enjoyed this darker tale.

Told from the child’s perspective this is an interesting tale of a small boy and his mother visiting a DIY superstore. It is a perceptively told tale as the boy, with his attention to detail, but likelihood of distraction, and the minutiae of his knowledge about such subjects as Minecraft, and his need to complete tasks has special qualities he and his mother are learning to figure out together. A lovely well told story.

There is an added extra at the end. An originally written view from a black and white photo which again is an interesting perspective.

The Date by J Anton

This is the kind of story that makes me thankful I no longer go out on dates. Our male character goes out with one Jekyll and Hyde type of girl and doesn’t know what he’s getting from one moment to the next. It’s the stuff nightmares are made of! Fortunately, the alarm bells ring in time for the narrator to make a wise decision.

This is a fantasy which I felt came from a longer piece of work, or could do. The Boy visits the Goddess of Love and Death for an elixir but she sees him for what he truly is and changes the potion. The sacrifice that follows causes a different type of rebirth.

I’m not generally a fan of fantasy but I’ve read this piece a couple of times now and it has grown on me, helped no doubt by this authors excellent descriptions.

Out of the Blue by Paul Sinkinson

Chris Brown meets an alien called Keiry and introduces her to his life. Stories about aliens from outer space are not my thing but there were some interesting points here such as what happens when you feed pizza to an alien. Overall I felt the story had a good base but it could have done with a bit more work and editing. There are POV changes and some points in the dialogue when I was confused over who was speaking. I should add though that this is not surprising given the extremely tight time frame for submission and publication of this anthology.

This also felt like it could be part of a longer piece which would obviously have a lot more work done to it before it was published in the future.

A Fine Bromance by Aidan Parr

A fine tale of the lifetime of friendship between two men which I enjoyed reading, right until the last couple of paragraphs. The story has a good pace all the way through but for me it then ended a little abruptly, and on a question. It may well be that given the time constraints this is as far as it got, but I think there is plenty more to explore in this story if the author wants to extend it in the future.

This seems to be part of a longer story. Jordanna is the matron of honour and the story is being told from the bride’s point of view. Jordanna is behaving very oddly right from the hen night and I’d have loved to have found out why, but we are left with a to be continued ending.

There are some terrific images created by this author in this story about a man called Romeo and it’s interestingly written but I’m not sure I totally understood what was going on in it, or the significance of the moose… but that might just be me.

Tulips and Love On the Mountain Top by Elaine Davis

This was a quite detailed account of friendship between two women who met at university and their life after including an eventual romance for one of them. There were some tense issues which caused the storyline to be a little confused at times but given a bit more time those could be easily sorted out.

I thoroughly enjoyed this story. The attention to detail in the build-up was excellent and just as you are starting to get the feeling that everything is not quite right bam, the twist comes and everything changes. Very good.

The Painting by C C Boaler

This is a really creepy story which begins when Lisa moves into her new office. She’s having problems with her partner, Josiah’s, mental health and things only escalate when she starts to hear things too. I think this has a horror twist to it which I liked and I thought the ending was terrific.

Tea for Two by Elaine Smith

This was a super ending to the prose section. A tale of the friendship of two girls who bonded over their love of tea parties. Who introduced each other to the way different people lived and whose friendship endured their separate lives until they met again and like all good friendships picked up as though they had never been parted. Lovely.

There is a large selection of poetry at the end which really shows off the talent of these writers and I admire their flexibility of being able to write both prose and poetry.

I am sure we will be reading more from some of these creative writing students.

2 Responses to #bookreview for Straight from the Heart, an #anthology of #prose and #poetry from the students of #Nottingham Central College @GreenWizard62 @PhilPid1 @NoveletteMW