#Bookreview for The Cost of Kindness by Alistair Dunlop 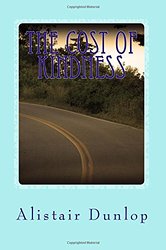 I reviewed The Cost of Kindness in March 2015 but it is one of the reviews I failed to put on the blog. However, as I have now read another book by Alistair Dunlop (review to follow shortly!) I am adding this now.

Bruce Cameron comes across as a reasonably cautious man so it is a little out of character when he offers a lift to a young woman that he sees by the side of the road but not completely, because she is distressed, and he is compassionate. What follows is the tale of a growing relationship with this woman, though of what sort is not even clear to Bruce, but crucially it is one which he fails to tell his wife about. He keeps meaning to but then the moment’s gone and it’s all too late and this was something I really liked about this book. The story is filled with every day, normal people, their lives and their honest reactions to the situations they find themselves in. When Bruce is away from Sue (his wife) he keeps resolving to tell her as soon as he sees her next but then he chickens out and that doesn’t surprise me judging by some of the remarks Sue comes out with. I would imagine she could be a fearsome woman. Eventually the truth comes out in rather dramatic fashion when Bruce finds himself in a very tricky situation and he then has to deal with the fallout of his actions.

This is an easy read and whilst some parts of this story could be trimmed down a bit which would have moved things on a little quicker overall I liked Mr Dunlop’s flowing writing style.

If you fancy taking a look, here are the links…