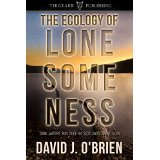 There are many reasons why you choose a book. I chose The Ecology of Lonesomeness because Mr O’Brien has a degree in environmental biology and a doctorate in zoology. I didn’t go to university because I didn’t know what to study but in the last few years I decided that this is what I would have read, had I gone.

This book tells the story of Kaleb, an American ecologist, who arrives in the Great Glen to study the ecology of Loch Ness on a two-year grant. He meets Jessie, a local girl, recently returned from university and they fall in love.

This book is the rather wonderful telling of two people and their meeting. The hesitant flirtation and initial conversations we all recognise from that rather heady period of time when you try to find out more about the one you are attracted to…lovely…and then their developing romance. And that is what this book is, nothing much happens in it, no tears, tantrums, no raging upsets but instead there are beautifully written characters who you can picture as clearly as the incredible setting in which they live.

Now I am a lover of the countryside, of space, peace and loneliness and O’Brien writes so brilliantly about the rivers, lochs and glens you can almost smell the heather. There is ecology in here, the science behind it and how it is studied which is fascinating and adds a terrifically different dimension to this read.

The characterisation was terrific. Kaleb, who is attractive, not so much by how he looks as we only get rare glimpses of that but by how he thinks. Jessie, whose voice was so clearly written I could hear the lilt of my Grandmothers dulcet tones when she spoke and she was just so likeable and down to earth I’d love her as a friend. Malcolm, Jessie’s father, brilliant, and just how I would expect a Scottish father of a girl being dated by an outsider would behave – haha! And I must mention, Ahab, who says a line towards the end that brought a little sparkle to my eye.

Hidden in all of this excellently paced writing there is ‘the secret’, for what would Loch Ness be without a little mystery and while it is pivotal to this plot line it sits in the story as smoothly and lightly as the whispered rumours that surround this part of the world.

As I said before nothing much happens in this story, but I couldn’t wait to get back to it each night and read some more, it is that captivating – an excellent job Mr O’Brien.

I read and reviewed this book as part of Rosie Ambers Book Review Team and received a copy of the book free for doing so. This has in no way affected my opinion of the book or the comments I have made about it.