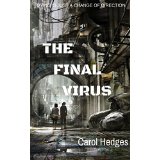 I don’t generally read YA books but having enjoyed another book by Carol Hedges I chose The Final Virus and was delighted I did. This is the start of a series but can be read as a standalone and for me its greatest strength is in the superb characters the author creates. You know exactly who everyone is and they are as real as they would be if they were sitting right next to you, which with Mr Neots I’m glad is not the case as he really is a despicable man.

We have Will, a popular boy at school, and with the girls, he’s kind to his younger sister Dahlia and they are both struggling since their father was killed in an accident at work. At least they are told it was an accident but Will doesn’t believe it and sets out to find the truth. Amber is a rather strange girl who sees terrifying visions about the end of the world and lives a lonely life with parents who are mostly absent. As already mentioned there is the odious Mr Neots a teacher from school who hates his family, apart from his equally revolting daughter, Kayla, his pupils and everything about his life as he seeks to better himself. I felt dreadfully sorry for his son Chris. But best of all we have Ned and I think we should all have a character as useful in our lives.

And then of course there is…The President.

At the start of this story there are just the usual teenage life issues going on but gradually there are more and more hints about the perfect, and totally controlled, world they are all now living in since the old one was practically destroyed in a cybercrash. Will and Amber gradually come together and this is very well handled as they are total opposites so their relationship evolves naturally and wasn’t rushed which I liked a lot.

For me the read occasionally felt a little rushed but that is probably because I’m not a YA and like to take my time with the build up towards events happening in stories but I’m sure this book will be hugely enjoyed by those who are. Well-written and with many thoughtful points to consider such as the four horsemen and the stick people, I highly recommend.

I received a copy of this book in exchange for an honest review and this has not altered my opinion of the read one iota.

To take a look for yourself here are the links