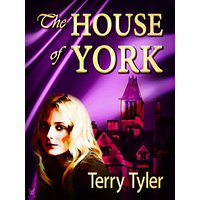 I know something of the story The House of York has been based on and of how King Edward IV met Elizabeth Woodville, or in this case, how Elias York met Lisa Rivers.

Tyler has written a tale of this family saga spanning over eleven years and involving more than twenty characters and the tale progresses with chapters written from about nine different point of view in whoever’s voice is most appropriate at the time.

Tyler writes the different characters very well throughout and I particularly enjoyed the earlier chapters. Gabriel’s was a joy to read and I seriously disliked Jane but then being a married woman I would, wouldn’t I?

I thought Lisa’s chapter in Autumn 2006 was particularly well portrayed as along with so many of the characters Tyler really knows the people she has created – what they would think about themselves and others, how they would react and interact with each other and I thought the development in the main players was superb.

If you’re unfamiliar with the characters of the Wars of the Roses, it doesn’t matter as this is a terrific tale anyway but there is an added pleasure to be gained if you do know who each character corresponds with during that period of history.

The House of York is another winner from this author and I shall be looking out for what comes next from her prolific pen.

If you want to see if you agree with me, then here are the links