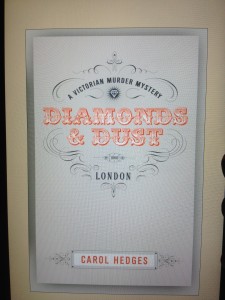 The cover – on my kindle!

Diamonds & Dust is a Victorian murder mystery set in London and written in the present. Josephine King, an orphan, is a good sort and stoic with, I felt, very little emotional response to the death of her Uncle Herbert or, perhaps she just showed the response that was expected in that era. Uncle Herbert had rescued her from the home she was living in, or I should say surviving in, after her parents died and his death leaves her a very rich young lady. It appears that Uncle Herbert had died of fright and Detective Inspector Leo Stride and Detective Sergeant Jack Cully investigate.

This story takes a rather unexpected and supernatural turn for me although when I think about it perhaps it is not that unusual given the setting and the time in which it is told. There is plenty going on throughout with the stories of other characters woven in seamlessly. The writing is wonderfully expressive and tight with a dry, clever humour throughout that brings a smile.

“Words swim in her brain like fish under thick ice. She struggles to bring them to the surface.” How lovely is that!

The descriptions of London are vivid, you can see the places, taste and smell them. The smog almost sticks in your throat. The way people lived, the customs, the airs, the graces… the bread and butter… are all detailed.

Although Mrs Thorne and her daughter, Isabella, rather push themselves into Josephine’s life I grew to like Isabella more as the story progressed and heartily approved of her behaviour. Her social climber of a mother was I imagine like many others with aspirations at that time and she was atrocious.

I would have loved to have found out more about some of the characters such as Trafalgar Moggs who happens to have just about my favourite character name ever, or of the relationship between Isabella and Henry Papperdelli. This is always a good thing as it shows that even the peripheral characters are interestingly drawn and that makes you start to invest in them.

The London accents were written so well you could hear them and they added richness to the characters. I’ve always liked watching the snobbery among the classes and have found it to be far more prevalent amongst the lower classes and this is shown to great effect by Annie, Josephine’s servant and a snob of the worst kind. She has more airs and graces than any one of the middle class characters and thinks herself better than so many others. Others such as Mrs Lilith Marks, who, although having had a rather dubious past is so much more likeable than any of those who are supposedly better bred.

The story is written in a delightfully proper manner that is so very Victorian and I’m pleased to have eventually got round to reading it.