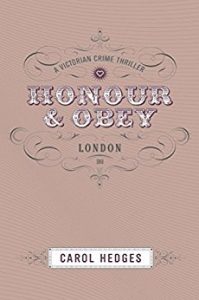 In Honour and Obey there’s a killer, loose on the streets of London. He’s nicknamed The Slasher by the popular press, is targeting young blond women and, as all decent murderers do, he’s leaving his calling card at the scenes of crime.

Strong women abound in this novel and I thoroughly enjoyed their interactions particularly between the older and younger generations. My favourite was Hyacinth who has lived under the yoke of her bullying mother and hideous sister her entire lifetime and who’s future I feared for as she tried to break free. It is easy from the distance and cynicism we view her naivety not to want to shake her into awareness of the danger approaching and her development was terrific to watch.

I also loved the Mullygrub’s whose names, when revealed, belied the circumstances in which they lived.

I felt for Stride having to endure the endless and frustrating tussle with the press who taunted the police who were struggling to track the killer down and I enjoyed the tentative building of a romance for Cully. But then amongst all these delights we see the murderer, we know who he is and where, and how, he lives and it gives us a disturbing insight into his life.

Ms Hedges writes in a style that makes it appear as though you are on the very streets of the London she is so eloquently describing and it really brings you into the story when a scene unfolds and you feel you can almost reach out and touch the fabric of the dresses as they pass and unfortunately smell the fetid streets as you walk them.

This is a terrifically well written sequel, there’s humour and dry wit throughout and I thoroughly enjoyed, and recommend, the read.