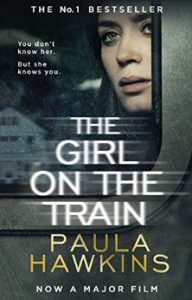 As someone who loves watching other people I was really looking forward to reading The Girl on the Train. I thought the premise was terrific. Who hasn’t sat on a commuter train/any repetitive journey to work and imagined the lives of others as you pass by the same places day after day?

There’s this bit at the beginning which resonated, ‘I can’t help it, I catch sight of these discarded scraps, a dirty T-shirt or a lonesome shoe, and all I can think of is the other shoe, and the feet that fitted into them.’

I enjoyed the gradual unfolding of the story, of discovering Rachel, and realising her unreliability with each bottle that she opened.

Of course it turns out that Rachel has history with some of those she watches and as this is revealed we also get to see the story from the points of view of the other women involved, Anna and Megan. When Megan goes missing Rachel becomes more and more obsessed with her disappearance and overly involved with the other characters.

I generally don’t attempt to solve mysteries when reading I just like following the process until we eventually get to the big reveal but I did find myself thinking with this one that the cast was pretty small and therefore the suspects were a little thin on the ground so I was not that surprised when what happened, happened. However, it was fine, I was thoroughly entertained on the journey getting there anyway.

Highly recommended to all those who enjoy making up the lives of others.