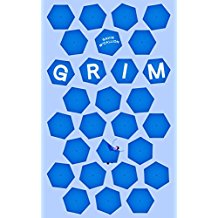 I picked up Grim following an email from Ebookskill, the book was free so I thought I’d try it. Here is my review.

The story is told, mostly, from the point of view of Cora, a gay teenage musician, whose father died when she was young and who has a stepfather, Thomas. Because of a lack of attention to detail by Judge Rabbit, a truly vile character, Cora’s father is brought back as The Reaper and is called Grim. He is utterly useless at his job but you really feel for him and the position he has been put in.

Grim soon realises that Cora has disappeared (along with many other teenagers) and he and Thomas set off to find and rescue her.

For anyone of a sensitive disposition this book is pretty graphic and there is a lot of F word use – that doesn’t bother me because it was totally fitting with the story but it might offend some so feel duly warned. There is a chapter – A Lovely Morning Walk – which although brilliant is utterly revolting, yet so vividly and compellingly is it written you can’t look away. It reminded me of a similar piece of writing by Mark Barry in the Cedar Forest chapter of Violent Disorder.

While I really enjoyed reading Grim I did feel it was perhaps a tad over long and some of the antics of some of the characters could perhaps have been tightened up a bit but I’m probably being over picky. It was very well written, darkly humorous, the type of humour I like, and filled with wonderful characters such as the long-suffering, Derek, Judge Rabbit’s butler.

If you like all the things I’ve mentioned above and reading something original, then this is for you.