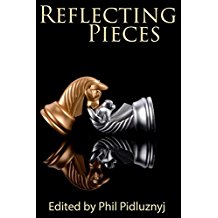 I have read all of the anthologies produced by the students of this creative writing course and am always amazed at the quality of the work produced by, often, first time writers, and in such a short period of time. In each of these anthologies there is always an informative Foreword from the editor, Phil Pidluznyj, which gives you an insight into what is covered on the course as well as what to expect in the book. As always there is something for everyone.

The Grand Old Barber Shop by Manda Greasley – Joe, the barber, is approaching retirement after a long career he wasn’t expecting to set out on, like so many of us. A long time regular comes in and I really enjoyed the observational writing about this customer, the twist at the ending completely taking me by surprise.

Opportunity Knocks – B.N. Newton – Set in East Berlin this tells the story of Peter, who works in a hotel and dreams of freedom beyond the Wall. An opportunity for just such an escape presents itself and grabbing it with both hands he sets off, only to be unexpectedly intercepted. However, there is a super twist at the end which changes the whole outcome.

Passerines – K.A. Nilan – This is the very well written tale, partly told as a dream, of a woman who finds out her life-long friend, and on off lover, is getting married. I thought the dream section worked very well portraying all the absurdities dreams have as well as revealing the subconscious thoughts that are so often expressed in them.

Time – Caroline Stancer – Told from the perspective of someone in a psychiatric facility who’s struggling to get through the time there this story is interesting and covers various episodes and characters. I really liked this, ‘there’s less time than there used to be. You don’t struggle to get through it, you struggle to slow it down.’ I think we can all relate to that!

Rose House – Elaine Davis – The Rose House is a story of a young innocent girl who meets a friend and ends up travelling to London to her party. She reminisces about another trip she’s been on and this style of writing comes across very much as a memoir.

The Destined Famalam – M.G. Kamau – This is the somewhat brutal story of three guys, Dom, Billy and Obadiah (love that name) who live ‘where drugs and violence stained the streets with blood and fear.’ I loved Obi’s grandmother, cool and solid, just what the boys needed.

The Bridge – Safa Choudhury – This is an interesting tale of how a wealthy lawyer, full of remorse for doing his job too well, winds up on a bridge where he’s about to be mugged. The reasoning behind the lawyer’s actions and the outcomes because of them are examined as decisions have to be made. The last line is breathlessly delivered in that way that leaves you wanting more.

The End of Autumn – Xanthe Hirst – In this fantasy the protagonist is a Soul Seeker who is starting to have doubts about what she is doing, even though she is very good at it. When she gets the chance to save someone from the fate she is offering she takes it expecting consequences, but not what actually happens.

The Dragon Prince – C.C. Boaler – This fantasy, part of a longer novella, would not usually be my chosen genre to read but I found myself drawn into the tale anyway able to picture the setting clearly and becoming interested in what was going to happen to the characters involved.

The Collection – Elaine L Smith – I was already enjoying reading this story, empathising with the younger sister, from whose perspective it is told, when something happened which took me completely by surprise, pleasantly, I should add! This author does a great job in building the characters so I could see exactly how irritating Lucy was, the atmosphere of the piece was great and the twist very well done.

Not only do these authors write prose but several have written poetry as well and there is a collection of that at the back of this book together with another by Julia Silverio and song lyrics by Jeri Taylor.