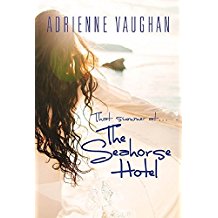 The romance in this novel is not only in the plotline or between the characters but for me it was in the fabulous setting. A crumbling estate on the dramatic coast of Ireland, what’s not to love.

Mia is a dresser on film sets (I thoroughly enjoyed the attention given to the detail of her work) and is the favourite of an aging film star, Archie Fitz, who has been great friends with Mia’s mother, Fenella, another film star, for many years. Sadly, Archie is dying and as friends and family gather around him at Galty House, once known as The Seahorse Hotel, the dynamics in the relationships come to light along with the truth as secrets from the past are at long last revealed.

Adrienne Vaughan’s characterisations are very good. Mia was terrific and I particularly liked Archie, I’d loved to have known him he was such fun. I was curiously drawn to the green-eyed cat that arrived towards the end of the book too but shall say no more on that.

There was a lot that happened in the storyline, which I won’t go over, and Mia faced betrayal along with her grief at losing Archie. I was pleased the estate went where it should have done and with the plans eventually made for it. As for the romance, well that was nicely done. Realistic and not slushy, just the way I like it!