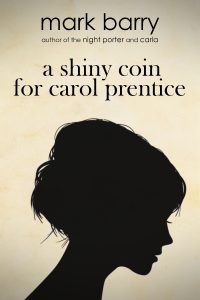 ‘…it’s all about the writing as art.’

Because this is what Barry writes, real lives. His characters, and their interactions with each other, are honest and totally believable, even when they do things we could never imagine. Nothing is shied away from and while we love the rapport shown between some of his people, the faults, failings and weaknesses of all are viscerally depicted on the page.

Carol has moved back to Wheatley Fields following the death of her father. I imagined her as glamorously gothic and totally cool, but her fabulous hair, makeup and clothes make her an oddity in the conservative passages of her home town. She gets a job at the book shop working for the older and wizardly wise Steve and they hit it off, becoming friends as well as work colleagues.

One day there’s an altercation between the odious Toby and Steve, when the former tries to buy a comic, and it is this that is the catalyst for the shocking events that unfold.

While Steve bears the brunt of what is to come Carol knows it is not aimed at him, because following a terrible betrayal when she was last home she has returned with a plan for revenge, and it’s one she’s determined to see through.

Readers familiar with Barry’s work will recognise references such as the Arkwright Trust from The Night Porter, The Jacket, a short story in Punk Rocker, and Carla, of course, as this is its loose sequel. There’s a brief cameo by Mark himself as the writer in Wheatley Fields the setting for many of his novels.

I enjoy reading Barry’s work in total silence and ideally in the dark, my screen the only illumination. I don’t like there to be anything to distract me from the precision of his words, the fabulous one liners and flowing passages, and throughout, the observational wit. This read was to be no exception, and it really is that cliché of all things, a page-turner, because you simply have to find out what is going to happen.

This is no boy meets girl romance but Barry is right, this is a love story, albeit a deeply saddening one which he makes you feel, all the way to its end. Because when you take away everything else there is only one thing left, hope, and I was left hanging on to that. A Shiny Coin for Carol Prentice made me shed tears, and when a book does that to me I know it is truly special.