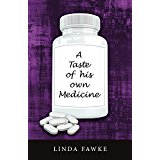 I received a copy of A Taste of his own Medicine from the author as part of Rosie Amber’s Book Review Team and in exchange for an honest review.

I chose to read this book because I liked the premise of it. Kate has been invited to a thirty-year reunion of all those with whom she had graduated her pharmacy course. The mere thought of this fills me with horror. I can’t remember names to put with faces and the idea of catching up, reminiscing and the inevitable retelling of stories that would only show what an idiot I was back then brings me out in a sweat. Still, each to their own.

Kate doesn’t want to go either, initially, however, encouraged by her husband, Neil, the idea grows on her but mostly because of the opportunity for revenge. She enrols her long-time university friend, Becky, in her plans, although Becky is a little reluctant to go on the weekend (with good reason it turns out!) At first I thought Kate was only wanting to get back at one person but her ambition then grew and several were involved, which seemed a little unrealistic.

While I liked the idea, for me much of this story line was overly detailed. Quite rightly pharmacists need to be incredibly precise people and this author showed her character, Kate, to be just that by the way she was writing her but it did slow the story down somewhat. The dialogue could also do with a bit of a tighten up as well. When in conversation people rarely get the chance to say much more than one sentence, maybe two, in the general back and forth and there was a lot of explaining, which isn’t always necessary.

I thought the fallout from the weekend was particularly interesting though and enjoyed where the storylines led. The author has also left much open for the sequel with the surprising ending.