#TuesdayBookBlog #bookreview for Thirteen, an #anthology of #prose and #poetry by the students of the creative writing course at #Nottingham College @PhilPid1 @GreenWizard62 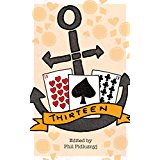 The Lost Cause by Sanja Moore

This was a terrific story to start off the anthology with. The narrator is an unpleasant character who makes no secret of how much he dislikes his partner. She inveigled herself into his life, without being asked, but other than treating her badly (and it makes for uncomfortable reading at times) he doesn’t take any action to end the relationship. I guess choosing the coward’s way out of hoping if he treated her badly enough she would make the decision to go. Really enjoyed the read and the twist at the end was very well done.

Windmills and Daffodils by Finlay Thorpe

I enjoyed the writing in the second story. Sean is grieving following his mother’s death and has been paralysed into inertia by his grief. A friend arrives with a puppy and a favour to ask. Could Sean look after it for the weekend? He takes on the challenge and takes Odin for a walk. But while out he experiences something very strange indeed.

This takes the form of a daily diary or log of someone embarking on an exciting trip to an unexplored valley in the jungle somewhere around the Amazon, I imagine for its exact place is not given, to study the plants and animals. The researcher discovers many strange new things and I really liked the sinister twist at the end of the tale.

This is a terrific story of office politics. Through the writing I really felt these characters come alive from the stressed boss, Matt, to the efficient secretary, Sue. Harrison was suitably sleazy and Zoe likeable, and up to something more than just her job I felt throughout. This was revealed by the excellent twist in the ending. Good job!

There is so much story packed into this one. From the innocence of Morris dancing in the 1930’s, through the start of the war and onto the evacuation at Dunkirk. William Boddy is the Constant Billy throughout along with the song first danced to and last heard. Well researched and authentically written this is very well done.

The Proposition by John Harte

When I started reading this I thought, uh oh, fantasy… not my favourite. However, I love to be proven wrong. This is an excellent story, brilliantly written. The characterisation is terrific and the moral dilemma very well thought through to its chilling end. Superb!

Where to Find the Bilingual Cat by S. He

This is the story of Chinese student, Xiao Min, and I found it interesting as it tells of her struggles with adapting to life in England. There were things I’d never thought of such as the difficulties with ‘getting’ the sense of humour, and cultural references. And there is also a missing cat which meant I found the ending a bit sad.

This story starts off as one thing and ends up as something else entirely. A man wakes and it takes him moments to realise he is not in a room but in a cell. The story gradually develops with the use of fragments of flashback memories until the sinister reality is revealed. This was written well and I enjoyed the read.

I have read, and enjoyed, the work of Xerxes before, in fact he is a favourite author of mine from the glorious North. This was very cleverly written. All dialogue, no tags and no confusion over who was speaking. And it was entertaining, what more could you ask for!

Dee Jay by John Harte was a long poem all about becoming dad and all the feelings that go along with that.

It was nice to see three poems by Phil Pidluznyj, Tomorrow, Blank Verse and Blinkered, all of which had a bleak darkness about them which I liked very much.

A Spider Life by S. He was a poem exactly described by the title and I loved the knitting reference.

My Last Will & Testament by Ava Nicholson was an entertaining poem giving the sort of instructions we should all leave behind. I particularly liked the box details which made me laugh out loud.

All in all this was an excellent anthology, one which I greatly enjoyed. Well done everyone.