#bookreview for Wonder by R J Palacio – a book for 9 – 11 year olds, apparently. I’m slightly over that but loved it anyway :-) #TuesdayBookBlog 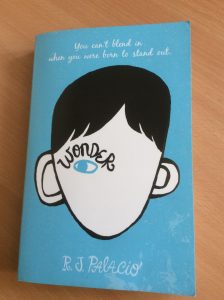 August is a ten-year-old boy who is anything but ordinary. The story starts off by being told from his point of view but as you progress through the book the reader does get to see things from the viewpoint of others: his sister, his friends, for example.

Up until this point August has been home schooled but it has been decided that he should start regular school. The problem is that August is very unusual looking, and we all know what kids are like. August doesn’t describe what he looks like, he says, “Whatever you’re thinking, it’s probably worse.” But you do get hints through the story along with the details and number of operations August has had to undergo just to get this far.

This book covers the array of relationships that follow. From friends who are friends because they’ve been told to be friends, to those that don’t even try and actively cause problems for August. Friends that are true but when put under pressure by their peers become easily led and, thank goodness, those that are such a delight they are refreshingly honest and accepting and wonderful. As a mother I found the bullying August faced heart breaking and I could totally understand his parents questioning their decision. I would want to keep him protected at home too, but that is not what being a parent is about.

This book really makes you think about what makes a true friendship. August gradually becomes more settled and accepted for who he is. You would like to think that children reading this would examine the way they behave with other people but I would imagine that would depend on how emotionally developed they were in the first place. As always some children would get it, others would not.

Books and films are often called uplifting and I haven’t always felt it, but I did with this. A terrific story of a courageous little boy who finds his own path, the special people he meets along the way and a book that I think should be compulsory reading in all schools.

8 Responses to #bookreview for Wonder by R J Palacio – a book for 9 – 11 year olds, apparently. I’m slightly over that but loved it anyway :-) #TuesdayBookBlog