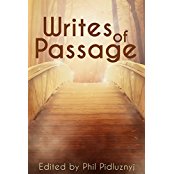 The students of Central College Nottingham are a prolific lot and within a course of, I believe, ten weeks they have managed to write, prepare and publish this anthology, Writes of Passage. Quite an achievement by the students, and their tutors. There is some really good stuff in here as well.

The Rendezvous by Louise Bowman is set in Paris and I thoroughly enjoyed Monsieur Hubert’s journey to meet Madame Flora. I won’t give the game away by telling you who, or what, Madame Flora is, but this tale is based on a true story, so we’re told.

The Wolf and the Raven by Megan Archer is a fantasy in which Princess Nalina frees herself by turning into a wolf each night and escapes the castle accompanied by a raven. Searching for a life where she can be free one time she keeps on running and as always her friend is waiting for her.

Spitting Feathers by Sapphira Kingfisher is a vividly descriptive tale of a Siren, wounded and tired, and Simon, one of a group of soldiers who have been sent on a mission. The ending is terrific; you just know there’s going to be more to this short story.

In the Dark by Damian Goy is the creepiest tale I have read in a long time. Michelle wakes up and can see nothing, absolutely nothing. Initially I thought she had gone blind but then she calls out to her boyfriend and the whole thing just becomes more and more scary. Very good!

November by Deniz G is a harrowing tale of all consuming and destructive love that begins at first sight and ends… well, I won’t give that away, but it ends. And this author makes you feel the pain of the breakdown of this relationship with her words.

Adoption: A Short Story by a Short Adoptee by Agnes J Freeman is a story told from the point of view of the adoptee who I initially thought was one thing but then it became clear it was another. I can’t say much more without giving it all away but I did like the idea of the Musketeers.

On the Run by Ivory J Longley I believe from the introduction is a true story, or a story based on a true happening which makes it all the more interesting. Three lads have run away from a children’s home and travelled to Whitby. They’ve been gone for two days, found kindness in strangers and had one or two adventures along the way.

If You Go Into The Woods Today by S H Nicholson is a short tale but it tells of the growing fears as the narrator gets lost in the woods and then finds she is not alone. We’ve all been there, as it turns out.

Disguises by Ben Matosic is a short but atmospheric story which I liked a lot as initially I wasn’t sure what was going on but then, by that last line, it was crystal clear.

There then follows poetry. The City of the Gated Heart, Autumn Breeze, A Warrior Prepares for Battle and I can see the end by the prolific Jen Skuse. My favourite being Autumn Breeze. Caravan, Five Red Roses, Christmas ’72 and Lips by the equally prolific Ivory J Longley, and I loved the sentiment in Five Red Roses.

Lastly, there are excellent Haikus by Jen Skuse and the Haiku Queen herself, Holly Cassidy, one for each day of December! Very clever!

This was an entertaining read that shows the breadth of originality that can come from a small group of people.