Cover Reveal for the 2nd Edition of A Single Step 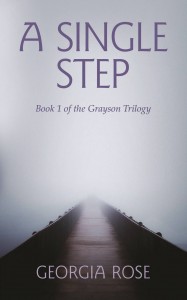 Out with the old…

On the 22nd August 2012 I typed the first words of what was to become A Single Step, the first book of The Grayson Trilogy. I was heady with excitement that this was, at long last, going to be it, finally the time had come when I would actually write a book, I remember it vividly. The story had come to me while I was on holiday, like a whole complete thing in my head, and delirious, mostly with sleep deprivation, it was the most terrific time but boy was I naïve over what was to come.

I wrote frantically, filling every minute I had available, waking at 4am when scenes had vividly come to life in my dreams, desperate to get the words out before they disappeared forever, driven out of my head by the deluge of work I was under at the time.

I lost 20 lbs over the three months it took to write the first draft (but fear not dear reader for I have managed to put that, and so much more, back on – no danger of me fading away here…no siree!)

Music has played a huge part in my writing and there are many pieces that will forever be associated with various scenes. Though I haven’t ever said much about these because I don’t want to influence any reader with my tastes. This is the same reason why I don’t put faces to my characters – either on covers or by telling who would play the parts should it ever be made into a film (hahaha!). I believe that is something for the reader’s imagination, everyone builds their own image and brings their own experiences to the read.

And generally I keep this to myself, however, today I will give you this sensational track, sung live by the fabulously emotional Mary J Blige on Later with Jools Holland right back in 2002. When Emma drives to the Melton Estate she flicks on the radio, and this comes on. For me it says it all…

Scroll forward many, many months and I eventually published A Single Step in January 2014 and since then I have been delighted with how well it has been received. It has exceeded all my expectations although coming from a place where I didn’t believe anyone would ever buy it I guess that’s not too difficult but I have been constantly delighted to find that people have bought it, read it and then gone on to write terrific reviews.

I have also found that the independent publishing world is so much more than I could ever have imagined…filled as it is with unexpected friendships and an unrivalled generosity from the fabulous online community that I can’t thank enough for all the support that has been given to me.

Well…I have learnt a lot…and I have listened to what my readers say, so building up to the launch of the 3rd book in this trilogy, Thicker than Water (yes it really is nearly here 🙂 ) I decided to do a revision of A Single Step – clearly getting one book out was not enough for me (and don’t even talk to me about what I’m doing to Before the Dawn!) and a few days ago I was cursing myself for ever starting on this venture but now  here I am and I know it was the right decision.

I received a comment that I should revamp the cover and so I have, and I hope you like it. I have found covers the hardest part of this whole process. What is it that draws you to a book? I don’t know, it’s not something that I can articulate only something I feel when I choose a book. So this time I’ve relied on the wonderful designers at SilverWood Books.

I am aware this story is a slow burn, I wouldn’t have it any other way but I have changed the first chapter in an attempt to make it a little more immediate (and no I haven’t added a gratuitous car chase or sex scene!) I’ve also cut out another section (my heart bled to do it) so some 3.5K words have gone. I’m hoping that what’s left is a sleeker version of the original but with no loss of the essence that some have loved so much.

Anyway, three years on and the 22nd August 2015*, seemed like the perfect day to reveal the new cover and the 2nd edition of A Single Step and here it is… 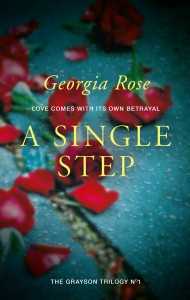 …and in with the new!

So meet Emma Grayson, heroine of The Grayson Trilogy, a series of mysterious and romantic adventure stories.

‘The gun continued to be levelled at me. “Answer it…but don’t tell him I’m here or he’ll get to listen to you die.” That concentrated my mind considerably, and as I reached for my phone I came up with a plan…’

Emma Grayson was left devastated when her life was torn apart by tragedy and betrayal. Now someone believes it’s time for her to start again and puts an advert for a job through her door which leads her to the Melton Estate. Despite her desire for a solitary existence she finds herself discovering a life she could never have imagined, challenging her independence, her fears and her resistance to love.

If any of you out there bought the original and want to see the updated version give me a shout and I shall wing a copy over to you.

* I know it’s a day late but best laid plans and all that – Amazon took their own sweet time to update the files. On last checking the ‘Look Inside’ feature had still not been done.

There was a beautiful newsletter sent out by Carrie Lahain last week, this quote was in it…perfect…

“Every heart sings a song, incomplete, until another heart whispers back.” Plato