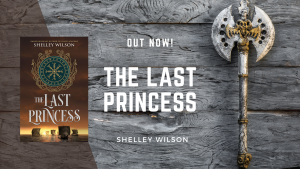 Writing The Last Princess was a passion project as I got to sink my teeth into historical research. Until now, my young adult novels have included supernatural creatures, swords and sorcery, faeries, witches, and dragons. So why did I choose to write about Vikings?

The inspiration behind this novel comes from a ‘spit in a tube’ Ancestry DNA test. I’m a huge fan of genealogy and so far have traced my Wilson line back to Mirfield, 1805 and my great-great-great-great-great grandfather, Thomas Wilson. I was so intrigued with my roots that I wanted to see what my DNA would reveal – the outcome was quite a surprise for this Yorkshire lass who now lives in the Midlands.

The results showed that 38% of my DNA was linked to Scandinavia/European West, and as my ancestors are rooted in Yorkshire the odds of being a descendant of a Viking invasion was highly possible. As a fan of Viking history I may or may not have read more into this than I probably should, but I plan to fully embrace being an honorary shield maiden!

When I mix together my fascination with the Viking Age, the possibility I’m descended from a warrior/invader, my need to travel far and wide, and my love of writing kick-ass female characters, we have the making of a novel packed full of battles, loyalty, friendships, love, and plenty of axe wielding.

Writing about a specific point in our history means I can’t just make stuff up this time. I needed to explore an authentic timeline that included real Anglo-Saxon places and people. The clothing, weapons, and customs needed to be investigated thoroughly, and I spent hours reading books and articles, and watching documentaries on Viking history.

Although my manuscript is entirely fictional, I had great fun including a few cameo roles for larger than life historical figures from 866 AD, and real-life places that played a part in the Viking Age such as Hedeby and Northumberland.

My research took me all over including a visit to the JORVIK Viking Centre in York to see first-hand what my characters would have worn, used in battle, cooked with, and also to smell an authentic 9th Century street – cow dung and rotting meat in case you’re interested.

The favourite part of my research was visiting Bamburgh Castle in Northumberland which plays a big part in this novel. In The Last Princess the castle is a wooden fort, but still stands proud on its rocky plateau where there has been a stronghold for over 1,400 years.

I think Northumberland is quickly becoming one of my favourite places to visit. My daughter accompanied me on my research trip I think she was as impressed as I was. Standing on the beach facing the North Sea and imagining what it must have felt like seeing the Viking ships on the horizon was inspiring.

I chose to set The Last Princess in 866 AD when the Great Heathen Army captured York. It meant I could integrate this large force into the story.

Researching this book was a lot of fun and I’ve already started working on an idea for a future Viking novel. 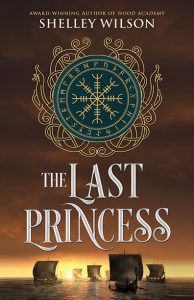 Edith still has much to learn about the art of ruling a kingdom, but when her family is murdered, she’s faced with the challenge of staying alive.

As a young woman in Anglo-Saxon England, Edith finds it hard to be heard above the Eldermen who are ripping the kingdom to pieces, but nothing can prepare her for the arrival of the pirates and the Vikings. Torn from her homeland and sold into slavery, she’s determined to survive at any cost.

Finding allies in the unexpected and enemies closer to home, Edith clings to her dream of returning home one day to reclaim her throne and to exact revenge on those who harmed her family.

BUY your copy of The Last Princess

She is a proud single mum of three and lives in the West Midlands, UK. Shelley loves travelling in her VW camper, searching for stories. She also enjoys paddle boarding, Tudor and Viking history, supporting Leeds United, and obsessing over to-do lists!

Early Praise for The Last Princess:

“This fast-paced historical novel builds on an obscure Anglo-Saxon king’s life to tell an empowering tale of a girl’s journey to fully embrace a new world, a new culture…as she grows into her own as a warrior. Edith’s fierce and often violent quest for revenge is juxtaposed with lovely, life-affirming moments of friendship and love in an engaging first-person narrative.” – Kirkus Reviews

“I LOVED this quick fantasy read. I can’t wait to share with my students once I get a copy.” – Dawn, Teacher & Goodreads Reviewer

“WOW! I don’t know exactly what I was expecting, but this wasn’t it! This story is absolutely amazing.” – Rebecca, Goodreads Reviewer 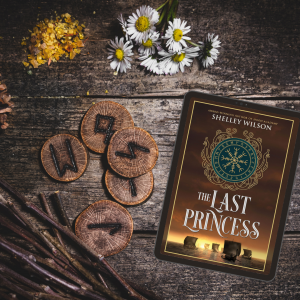