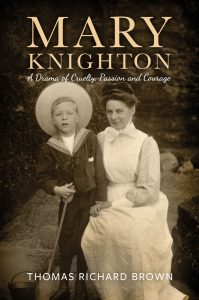 I’ve been meaning to do this for a while but, as you know, stuff happens and time has drifted. However, here we are, better late than never! As some of you may know I provide services to authors over on www.threeshirespublishing.com in the form of workshops and one-to-one support to enable others to get their work published.

In June 2016 Richard Brown contacted me having seen my advert locally to see if we could do some business. We met, we talked and having got on well we decided that yes, we could.

Richard has several books in mind to publish but his first one is this, Mary Knighton – A Drama of Cruelty, Passion and Courage. It is historical fiction, the story running from 1898 until around 1930 and is set locally to me, which adds extra interest and great potential for sales in the area.

The Story of Mary Knighton is played out in the rural backwater of north Bedfordshire and describes the lives and often harsh existences of the yeoman stock from which she comes. It starts in 1898 as she is ending her schooldays and contrasts the rural idyll with the isolation and cruelty that country life can bring.

Mary is headstrong, passionate and alluring but, after a promising start to a career in fashion, circumstances conspire against her and she is eventually forced into a hapless marriage. How she copes and overcomes her misfortune is compellingly told and her relationships with others develop as the story unwinds.

The first thing Richard asked me to do was beta-read his manuscript. Uh oh, I thought. I was not expecting that and remember leaving his place concerned about what I’d taken on. What if I hated it? What if it was awful? Or, badly written? All tricky things to have to deal with… fortunately I did not have to face any awkward conversations as I thoroughly enjoyed the read. I made comments, corrections, and I used many, many post it notes… 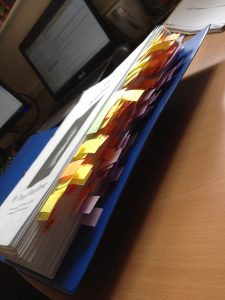 What you may notice about this file is, that it’s quite thick and indeed there are many pages in it. This was one of several challenges I faced with producing this book. It is 279K words worth of massive. This takes a lot of managing. Imagine every editing round, every read through, every formatting check. Imagine for a moment, the proof reading task. (Thank you Julia Gibbs!)

Discussions took place on splitting the book into two which would have been ideal but the natural split was at around two thirds through rather than a convenient 50/50. Also there is a terrific prologue and epilogue that work very well when it’s one book but less well with any division.

It took a year to eventually get this book published. We took our time. It is a huge book, it needed that time and we wanted to put out something we would all be proud of. And we are. 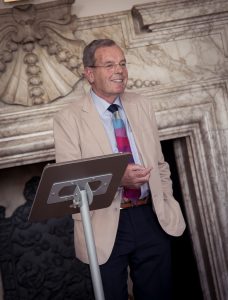 The photo for the cover was provided by Richard and the woman in the photo is who Mary Knighton is vaguely based on, because some aspects of this story are not complete fiction. The cover was designed by SilverWood Books. It is classy and fits very well into the historical fiction genre.

I saw myself as the project manager for the production of this book. My main role was to do the formatting and all the back office stuff required, including the uploading to the various platforms.

My main concerns were whether we would ever even manage to get this into the size constraints of Kindle Direct Publishing and Ingram Spark because we were going to do a paperback not just an eBook. It ran to 812 pages which is pretty much at the extreme of the print on demand possibilities. There were issues, many of them and I learnt new things, such as adding an index to a paperback.

This is Richard’s first book and he has every reason to be delighted with it. I loved the read, even after going through it many times. It is a confidently told story with characters that you get to know very well. Richard’s descriptions of the countryside are rich and his characters colourful. I burst into tears at one point I was so into it, taken horribly by surprise when something dreadful happened even though I knew, I knew, it was coming…

In June 2017 Richard had his book launch and like everything else he does it was done in style. The invitations were in A5 greeting card format with the front and back covers of Mary Knighton adorning the outside. It was held at Kimbolton Castle. There was fizz and canapés and it was a deliciously warm summer’s evening. 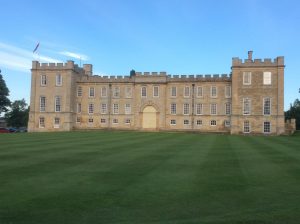 I took a cake… 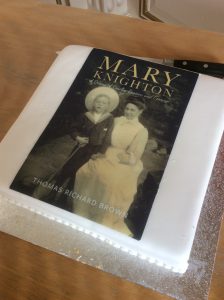 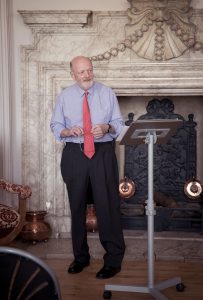 There were two excerpts, excellently read… 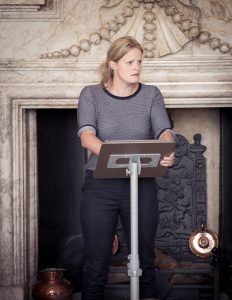 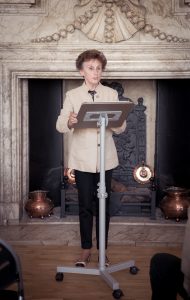 …and the crowd then queued up to get their copies signed by Richard. 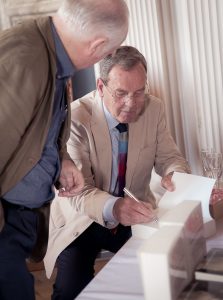 It really was a fabulous evening and Richard deserved all the congratulations that came his way. Mary Knighton is selling well, gathering reviews on Amazon and it is good to see her out there and finding new readers every day. 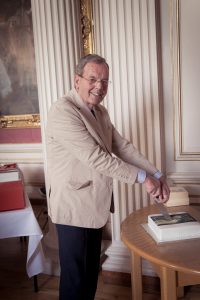 Richard has other projects in mind, I’ve read one already and have another on my desk to get to this weekend (hopefully!) so watch this space, there could be more to come 😀